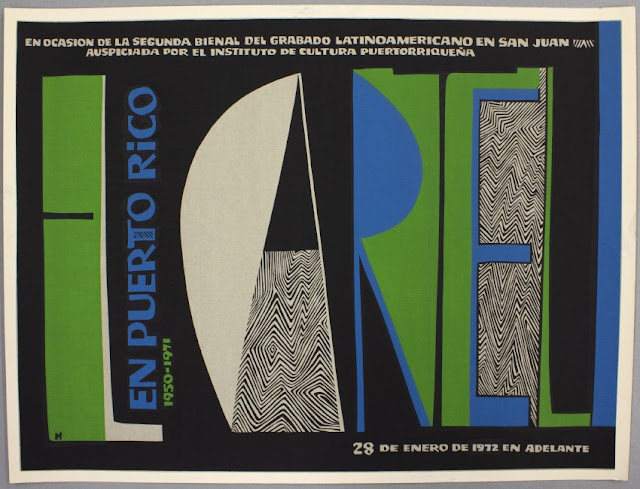 A selection of printed posters created by leading Puerto Rican and Nuyorican printmakers between 1960 and 2013 will be on view in the exhibition El Cartel/The Poster: Puerto Rican Graphics at the William Paterson University Galleries in the Ben Shahn Center for the Visual Arts from January 30 – May 5, 2023. Gallery hours are Monday through Friday, 10 a.m. to 5 p.m. and select Saturdays (April 1 and April 29) from 10 a.m. to 2 p.m. Admission is free. Curator Alejandro Anreus will give a talk on Wednesday, February 15 from 2 to 3 p.m. in the South Gallery, followed by an opening reception for the exhibition from 3 to 4 p.m.

Drawn from an impressive print collection formed and recently donated to the William Paterson University Galleries by artist Gloria Rodríguez Calero in memory of her late husband Angelo Antolino and in honor of Professor Anreus, these works capture the issues and reflect the conscience of Puerto Ricans living on the island and in the diaspora over a half century when graphic design became entwined with the movement for independence. Central to this focus on printmaking was the development of one of the most sophisticated and effective uses of the silkscreen (serigraphy) technique.

The commitment of Latin American graphic artists to independence is visible through the use of indigenous, pre-Columbian, as well as African-derived imagery; signs of national identity and pride in resisting Spanish colonialism and the U.S. occupation of the island. Recognizable imagery pays tribute to the September 23, 1868 Lares uprising and the patriots Ramón Emeterio Betances and Segundo Ruiz Belvis, labor leaders and social rights activists including Luisa Capateillo, Juana Colón, and Simón Bolivar, and Puerto Rican flags. Other familiar cultural iconography includes the vejigante, a folkloric character mainly seen during carnival time in Puerto Rico, and carved wooden saints hand-painted in the folk art tradition.

The designs on view are as diverse as the subjects, ranging from abstraction to figuration, silkscreen to offset to computer techniques, and from the bold colors of the Puerto Rican flag to dreamy, psychedelic rainbows of hues. According to Anreus, “These works are beautiful examples of graphic design and screen printing art, but they are also more than that. The iconography and images celebrate and affirm a sense of identity based on social justice and independence which are clearly evident in the Taino and vejigante images and noble portraits of Betances and Albizu Campos.”

El Cartel is one of three exhibitions on view concurrently in the William Paterson University Galleries. Ink, Press, Repeat: National Juried Printmaking and Book Art Exhibition will be on view in the Court Gallery from January 30 - March 24, 2023. The exhibition was juried by artist and master printmaker Susan J. Goldman and showcases a variety of print media by 50 artists including etching, intaglio, lithography, monoprint, screen printing, and woodcuts.