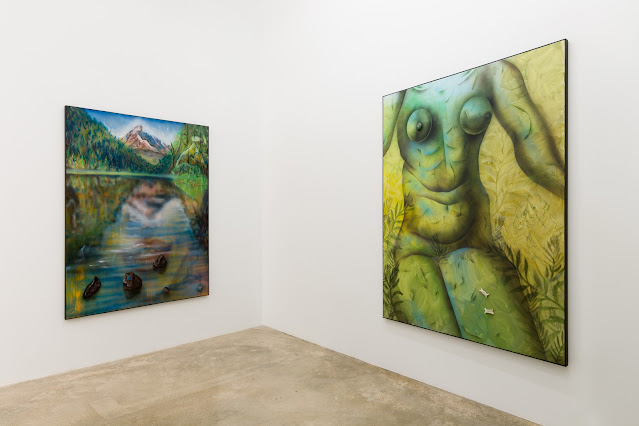 Satori, solo exhibition by Larissa de Jesús Negrón. Installation view at L21, 2022.
Satori is the moment when it is clearly discovered that only the present exists (where the past and the future are born), being created and dissolving in the same instant; thus, the experience clarifies that time is only a concept, that the past and the future are an illusion as is the whole physical world. Satori is a moment of realization at the highest level, of going beyond earthly experiences. This experience only occurs in a level of consciousness, common to meditators, but available to anyone; furthermore, it is not to be understood as an end but as a constant happening with no ultimate ending. They are flashes that arise from within, moments of total presence that do not last. No mental or visual noise. An unexpected moment. A moment of peace where you are not looking for anything. You don’t need anything. 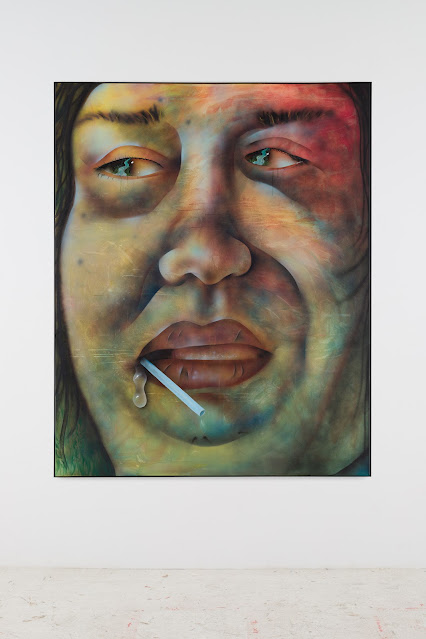 Atención al silencio, 2022
Acrylic, clear resin, oil pastels and color pencils on canvas
162 x 130 cm
Larissa De Jesús Negrón speaks to us in these works of the need for immediate pause. Of the instant where the mind and the physical body disappear. We raise our gaze to contemplate our surroundings, without needs or ambitions. These moments, baptized as satori, are closely linked to nature. De Jesús resides in New York City, a city of chaos, ambition, money and controlled disorder. Despite the situation in which she now finds herself, Larissa turns to the memory of her Puerto Rican homeland surrounded by nature in order to find her own nature. In previous works, she has visited on her traumas and fears in a very intense way, now she asks for stillness. She claims the need to vindicate that she is not defined by her traumas: “I am not my past; although it conditions and molds you, you don’t have to live in relation to your past”.

After this intimate revolution, she decides through these moments of satori to let go of her past. Larissa believes that artists become attached to their work and champion it as their identity. It is then that she asks herself what would happen if she were to lose her works: would she stop being her, would she lose her identity? That is why she wants to break with this clingy relationship and practice detachment. Perhaps in this way, by letting go of what she is tied to, she can find herself fulfilled. To what extent in an artist’s career do the works he or she creates identify him or her, or do they just feed him or her? These ideas arise from the artist’s own recent identity crisis as she created works that were being sent out to Korea. Larissa painted until she developed tendonitis in her wrist due to the pace of production. Also, the show was in Korea and the distance between her and the location affected her deeply. She suffered through the pieces, but she didn’t feel the enjoyment of the exhibition (beyond the money that only fills you up to a point). She wanted to feel fulfilled after she literally gave her all, but she did not. It was at that moment that De Jesús started this inner journey, this path to satori. It was at this point that Larissa began to read and investigate how to enlighten herself and be able to detach herself from her mind, from her physique, from herself. One of the books where she takes refuge is the classic “The Power of Now: A Path to Spiritual Fulfillment” by Eckhart Tolle. 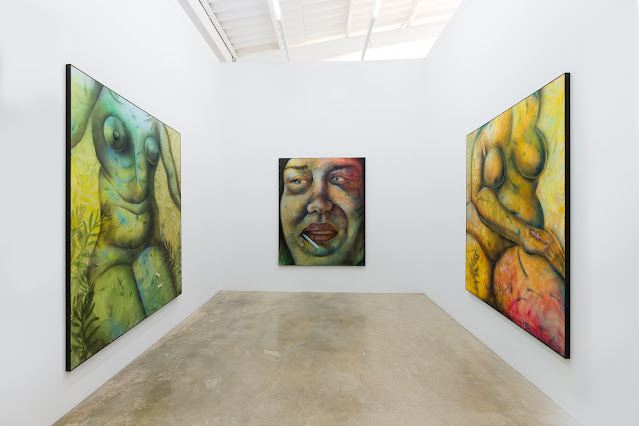 Satori, solo exhibition by Larissa de Jesús Negrón. Installation view at L21, 2022.
Yes, Zen masters use the word satori to describe a flash of insight, a moment of no- mind and total presence. Although satori is not a lasting transformation, feel grateful when it comes, because it gives you a taste of enlightenment. In fact, you may have experienced it many times without knowing what it is and without realizing its significance. It takes presence to be aware of the beauty, the majesty, the sacredness of nature (Tolle, 1997). In the works we see how her characters become transparent, beings that are one with nature, they let themselves be seen and let us see what surrounds them. Her muses are levitating in the instant of satori as if Larissa had photographed them in that precise moment of complete peace. In this exhibition, Larissa speaks to us and describes her own satori. 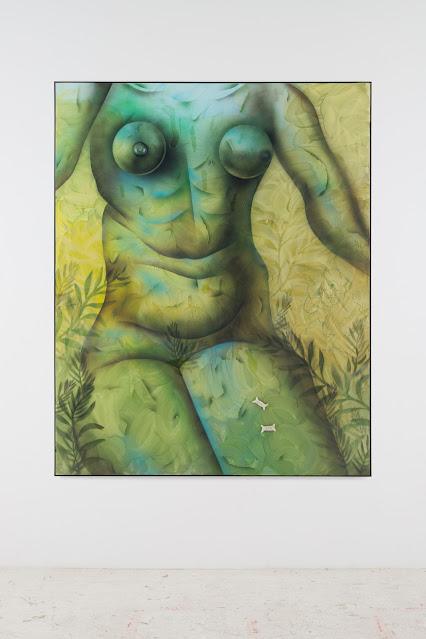 Mi deber es nutrir, 2022
Acrylic, clear resin, plastic, clay and color pencils on canvas
162 x 130 cm
Whenever you are present, you become to some extent “transparent” to the light, to the pure consciousness emanating from this Source. You also realize that the light is not separate from who you are, but constitutes your very essence (Tolle, 1997).

The satori goes hand in hand with the meditative process. In this case, this meditative process converges with the artist’s creative process. She finds it in the repetitive gestures when applying the “wash” in the background of all the pieces, at the base. These gestures are elements born from Larissa’s total presence, from her “no-mind”. Gestures that subsequently superimpose layers of different materials, creating these translucent glazes, all thanks to the characteristics of the materials themselves, such as resin, plastic, putty, etc. In her exhibition “Satori” , in Room 4 of L21 PALMA, Larissa wants to enjoy her life more than ever. She wants to detach herself from her thoughts and the fears that condition her. Taming her mind through meditation, letting go of her fears and envy. She wants to realize, without being overpowered by emotion. She seeks peace by detaching herself from her body. Reflecting in her works the juxtapositions of the transparencies of the voluptuous female bodies, letting us see what is around the bodies, what they are beyond form.

A longing for a moment of stillness.