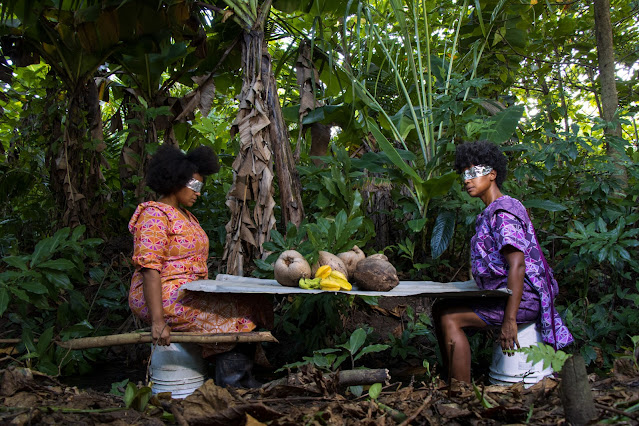 Las Nietas de Nonó, FOODTOPIA: después de todo territorio, 2020-21. [Two figures sit facing each other, with a large piece of sheet metal held on their laps between them. Each is blindfolded, and the background is filled with trees and vegetation.]

Posibles Escenarios, Vol. 1 LNN is a new a suite of multimedia works that will extend Las Nietas’s explorations of themes such as the medical industrial complex, processes of expropriation and colonial violence against Black communities, and the development of microhistories in relation to geopolitics. Throughout Artists Space’s ground floor, a series of interconnected visceral, abstract, biomorphic mixed-media installations—the largest of which will be a massive biodegradable installation entitled Sala Portal Omi. Made of SCOBY (symbiotic culture of bacteria and yeast)—the fermentation discs that develop during the production of kombucha—the installation creates what the artist calls “a restorative place for healing.” Believing that performative manifestations are vehicles to unveil silenced histories, it will double as a stage for a new theatrical performance premiering October 27-30. 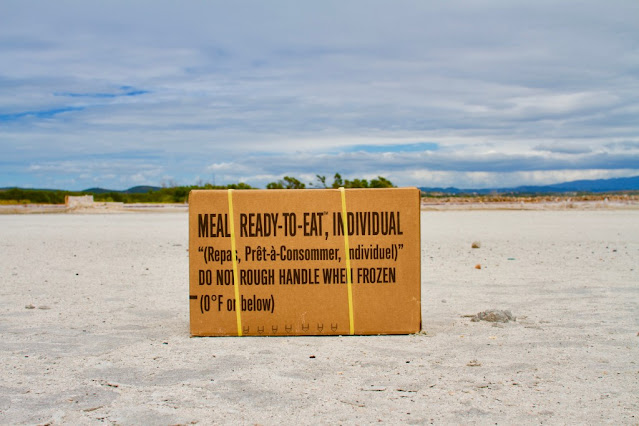 The polymorphous exhibition further unfolds across a series of landscapes populated by organic matter, living organisms, and experimental sound. Utilizing scene shifting—a theatrical technique used to indicate a change of locale—Las Nietas approaches the exhibition much like an album tracklist, cycling through organic materials and the sound of rapid beats, rhythmic rap songs, and natural melodies to archive nature’s vibrations in the midst of displacement caused by the legacy of colonialism and the current climate crisis. They will debut a new film, FOODTOPIA: en el suelo áspero, set in Rome that reflects on Las Nietas’s experiences of land and diaspora. The exhibition can be read as a set of discursive platforms that reflect on issues of ecology, land, food autonomy, and to strategize about modes of survival and recovery.

Las Nietas de Nonó will perform within the exhibition on the following dates:

The exhibition is on view from September 16 throughDecember 3 , 2022.

The afro-diasporic siblings mulowayi and mapenzi are Las Nietas de Nonó. In their creative process, they evoke ancestral memory through personal archives. Their practice incorporates performance, found objects, organic materials, ecology, fiction, video, and installation. In 2016, they created Ilustraciones de la Mecánica, a multimedia installation that was also commissioned by the 10th Berlin Biennial (2018) and by the 79th Whitney Biennial (2019). They have received the United States Artist Award (2018), The Art of Change from the Ford Foundation (2017), and the Global Arts Fund from the Astraea Lesbian Foundation for Justice (2017 and 2020). Las Nietas de Nonó are the recipients of the 2022 Rome Prize in Visual Art at the American Academy in Rome. Their art has been shown in Haiti, Cuba, the Dominican Republic, Ecuador, England, Germany, Italy, Norway, Puerto Rico, Scotland, the United States. In 2019, they co-founded Parceleras Afrocaribeñas, an organization run by Black womxn, where spaces for environmental and racial justice are created in the face of industrial developments that threaten their barrio of San Antón, in Carolina, Puerto Rico.