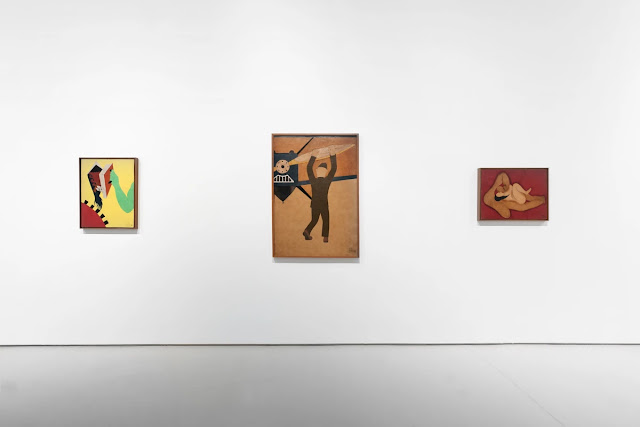 Anton Kern Gallery is pleased to announce a solo exhibition of Frank Diaz Escalet works on the second floor. The project has been conceived in collaboration with Andrew Kreps Gallery (New York) and kaufmann repetto (Milan). As part of this joint programming, a solo show of his work is also on view at kaufmann repetto in Milan from April 13 to May 23.

A mostly self-taught artist, Frank Diaz Escalet (b. 1930, Puerto Rico - d. 2012, Maine) spent over forty years devoted to making paintings and inlaid leather compositions–a radical and vibrant alternative to canvas that evolved from Escalet’s work as a successful leather craftsman. His paintings are often deeply personal: depicting scenes of the immigrant experience; his attempts to escape the Spanish Harlem ghetto of his youth; portrayals of overlooked laborers; and engaging with a visionary perspective on modernist abstraction. 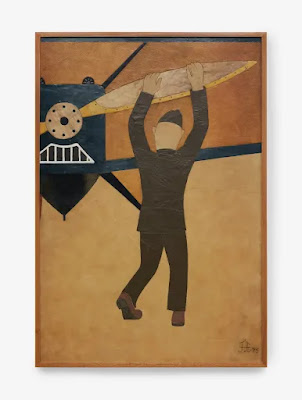 Untitled, 1975, Leather and acrylic on panel, 43 x 29 1/4 inches
The exhibition at Anton Kern Gallery is focused on his figurative works, highlighting Escalet’s acute understanding of humanity and his desire to make visible the unseen. Populating the gallery’s second floor is a cross section of humanity: a peasant woman, a father buying his son ice cream on a warm summer day, men working in a field, a couple in an erotic embrace. Escalet’s empathy for his subjects is evident through his intuitive sense for shape, form, and composition. Each is treated with a quiet dignity, and a clear devotion to the meaningfulness of including them in his artistic expression. The works are intimate portrayals of both real and imagined scenes and people, and have a subtle emotional impact through their masterful craftsmanship.

Escalet relished in the possibility of leather to act as both his canvas and his composition: stretching, painting, and uniting cut out shapes to form vibrant scenes. His vivid palette is reminiscent of his roots, influenced by both the tropical colors of his early Caribbean upbringing and the multicultural diversity of New York City. The compositions are often blended with abstract lines and shapes to form a ground or to exaggerate a specific feature, the artist joyfully playing within – and expanding – the possibilities of the unique combination of his materials. 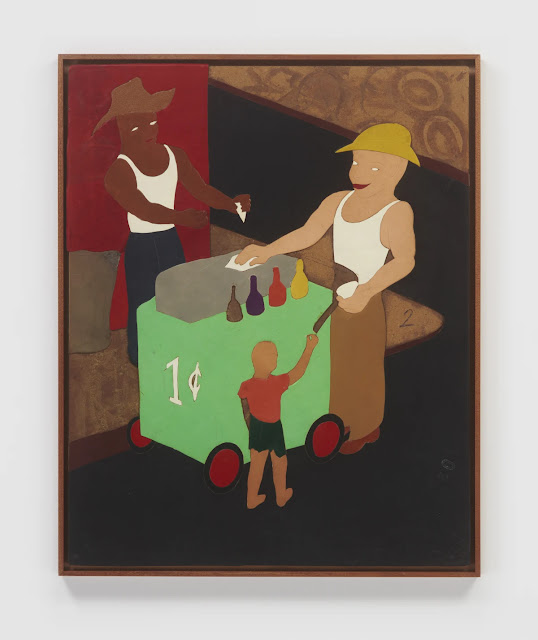 Frank Diaz Escalet was born in Puerto Rico in 1930 and moved to Harlem with his family at the age of four. Escalet quit school at a young age in order to work and support them, eventually joined the army and served in the Korean War. After his return, he worked as a mechanic, then a metalworker and jeweler, until he eventually found leatherwork. In 1958, he opened the House of Escalet in Greenwich Village, dedicated to fine handmade leather wares. The shop and Escalet quickly rose to high acclaim, securing custom jobs from celebrities such as Aretha Franklin and The Rolling Stones. The Museum of Modern Art commissioned furniture from him as well. In a quest for more tranquility and stability for his family, Escalet moved to Maine in 1971. In 1974 he began making the inlaid leather compositions that would encompass a large part of his artistic output. 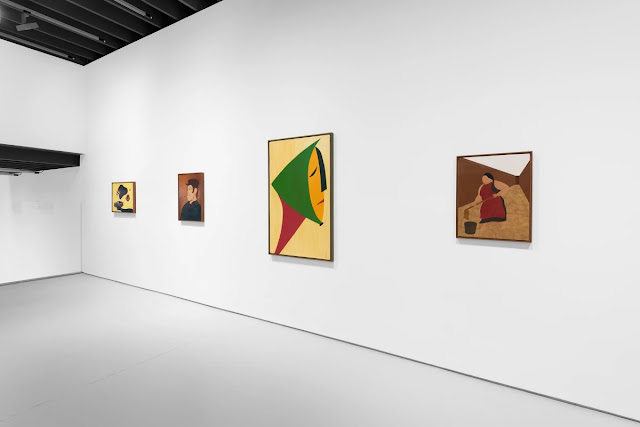 Though Escalet never enjoyed major success for the artworks in his lifetime, he did exhibit regularly in university museums. In 1989 he was the subject of a 30-minute episode of La Playa, a program that showcased Hispanic culture, broadcast by an affiliate of PBS. In 1990, 135 works by Escalet were featured in a traveling one-person show that opened in Prague and traveled to seven other countries in a “World Peace Tour” that lasted for five years–traveling behind the Iron Curtain, which Escalet considered an important diplomatic mission through his artworks. Now, ten years after the artist’s death, the three galleries are proud to present his works in the context of the fine artist he was, with pieces that resonate strongly in their artistic vision and message, with significance both in their lifetime and in the contemporary world today.
On view through June 18, 2021.
For more information: https://www.antonkerngallery.com/
Noticias