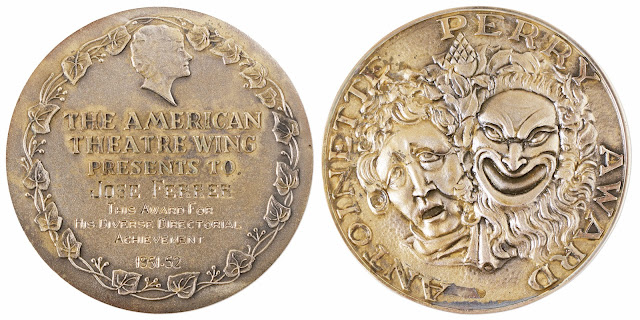 José Ferrer Tony Award --
Rare Special Tony Award for Winning Three Best Director Awards in One Year
LOS ANGELES - A rare Tony Award awarded to Jose Ferrer for Directorial Achievement in 1952, the same year he won in the category of Best Director for three plays: ''Stalag 17'', ''The Fourposter'' and ''The Shrike,'' will be auctioned by Nate D. Sanders Auctions on May 26, 2022.

Rather than awarding three separate Tonys, Ferrer was given this Award for ''Diverse Directorial Achievement''. In addition to winning Tony Awards in both acting and directing over the course of his career, Ferrer was also the first Hispanic actor to win an Academy Award.

Ferrer was a Puerto Rican actor, film director and theatre director. He first critical acclaim for portraying Cyrano de Bergerac in the play of the same name. In 1947, he received the inaugural Tony Award for Best Actor in a Play in 1947. He reprised the role in a 1950 film adaptation. He was awarded an Academy Award for Best Actor and was the first Puerto Rican-born and Hispanic actor to win an Oscar.

Ferrer was the uncle of actor George Clooney. He died in 1992.

Additional information on the Tony can be found at: http://natedsanders.com/Jose_Ferrer_Tony_Award____Rare_Special_Tony_Award_-LOT62011.aspx
Noticias