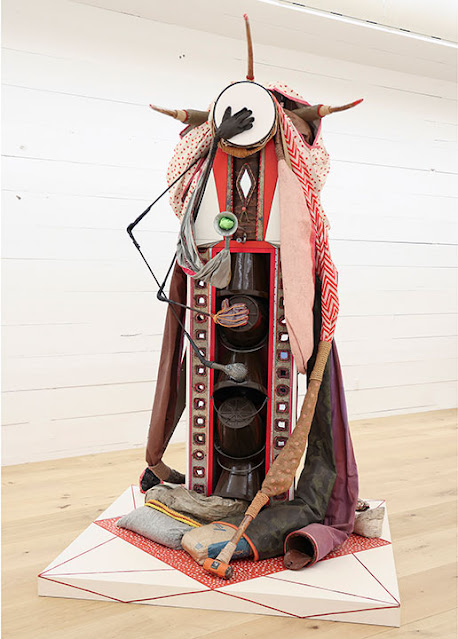 Daniel Lind-Ramos (b. 1953) is one of the foremost contemporary artists born and based in Puerto Rico. Raised by a family of artisans and initially trained as painter, he later began to work in assemblage in a way that resonates with the making-do and spiritual traditions of the African Diaspora and with everyday life in his hometown, Loíza. The National Gallery of Art has acquired its first work by Lind-Ramos, Figura de Poder (2016–2020). 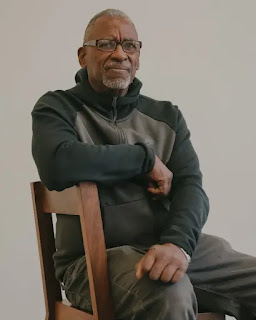 Figura de Poder suggests multiple figures that represent power (poder), sound, and force, such as a carnival reveler, a protester, a musician, a construction worker or manual laborer, an animal, or an athlete. The sculpture features three horns that evoke a vejigante reveler, a central figure in the Festival de Santiago Apóstol celebrated in the days surrounding the Feast of Saint James on July 25, while the dominant red color is associated with Chango, the deity of iron and war that is linked to Saint Barbara. Strong musical elements are found throughout the work—a tambourine that doubles as a face, buckets that make up the central "body" of the figure, and a maraca held by one of the gloved hands in the center of the sculpture. They refer to carnival traditions, contemporary political protest, and African-derived music as a site of cultural resistance in the Americas. Other objects—the boxing glove and sneaker seen in the back of the sculpture—are in part autobiographical and suggest the ways in which sports figures like Muhammad Ali became powerful Black social and political forces.

Lind-Ramos creates his assemblages from organic and found materials such as construction tarps, parts of palm tree trunks, and cinder blocks from Loíza, home to a historic Afro–Puerto Rican community and just east of the capital San Juan. His interest in these unconventional objects is also tied to his admiration of arte povera, the contemporary artistic movement that originated in Italy in the 1960s and relied on commonplace materials as a basis for artmaking. Drawing on music, sports, craft, and daily life, Lind-Ramos formed an arresting structure that evokes the indomitable spirit of Afro–Puerto Rican cultural practices and history.