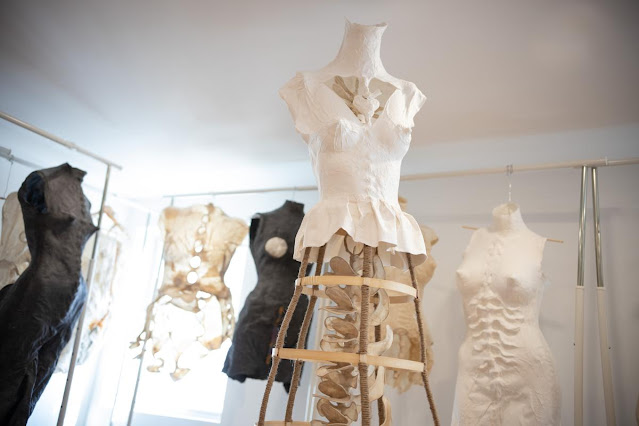 “Marta Peréz García’s incredibly poignant works convey the healing power of the arts,” says Vradenburg Director and CEO Dorothy Kosinski. “I am reminded of what our museum’s founder Duncan Phillips wrote 100 years ago when he started collecting art after the tragic death of his father and brother: ‘Sorrow all but overwhelmed me. Then I turned to my love of painting for the will to live.’” 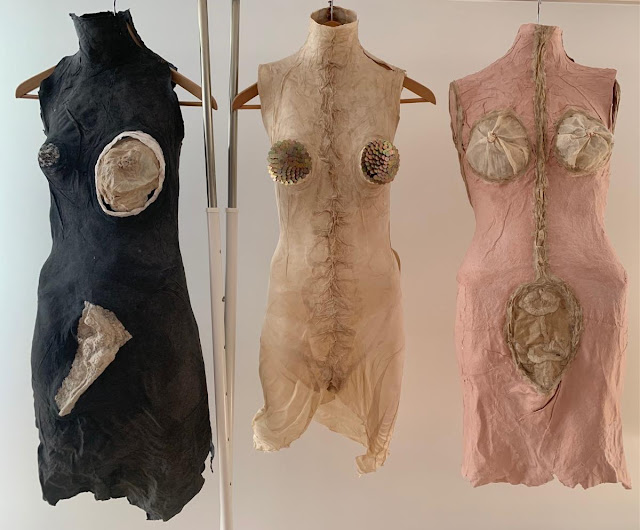 Works in progress in Marta Pérez García’s studio, 2021
Restos-Traces is comprised of 20 female torsos constructed of handmade paper with added elements such as wire, nails, metal spikes, hair and teeth, and film negative. The Spanish-English title (restos meaning ruins or remaining) alludes to the recollection and preservation of memories through visual storytelling, in this case memories of brutality, abuse, and trauma. Unlike the woodcut prints saturated with vivid colors for which she is best known, Pérez García’s headless torsos are muted, with skin tones ranging from light to dark. Modeled after a standard female mannequin, their sizes are similar, but their appearances and expressions differ. Some are dressed and others are more sexualized; some are hurting whereas others are fighting. They are at once eerie and beautiful, fearless, and dignified. What gives them bearing and power are their accentuated spines that become symbols of resistance, tenacity, and continued existence. As Peréz García says, “I try to give, in a way, visibility to the women who are not here anymore, but at the same time for us to see in these bodies our own lives.” 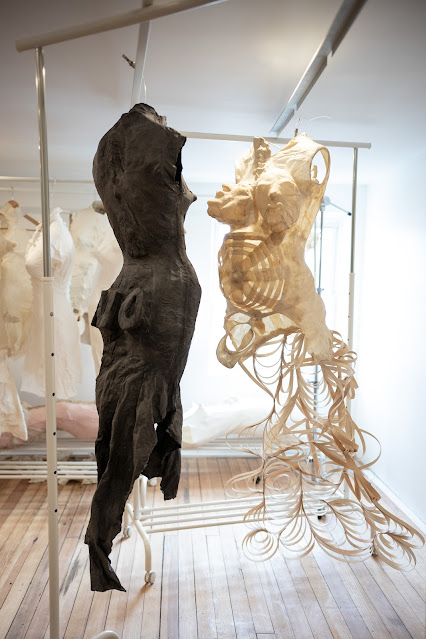 Works in progress in Marta Pérez García’s studio, 2021
In Restos-Traces, the torsos are clustered together and paired with two works from the Phillips’s permanent collection: Francis Bacon’s Study of a Figure in a Landscape (1952)—an austere painting that emanates loss, anxiety, and frailness—and Annette Messager’s Mes petites effigies (My Little Effigies) (1989–90), an installation with stuffed animals holding pictures of body parts with handwritten text expressing emotions such as anger, laughter, and reconciliation. When enclosed in the gallery space, the works of Bacon, Messager, and Peréz García intensify an array of physical and psychological states, from victimization to endurance, humiliation to resistance, and detachment to companionship.

“The Intersections series invites artists to create artistic interventions, many of which engage critical issues of our time. Restos-Traces demonstrates how art can capture highly sensitive subjects that might be hard to articulate with words alone,” notes Vesela Sretenović, Cross-departmental Director for Contemporary Art Initiatives and Partnerships.

“The project offers an important opportunity for individuals to bear witness to an issue that is often concealed behind closed doors and replete with victim shaming,” explains Horning Chair for Diversity, Equity, Access, and Inclusion Dr. Yuma Tomes, whose background is in multicultural psychology and community

Originally from Arecibo, Puerto Rico, Peréz García was trained as a printmaker at the Tyler School of Art and Architecture at Temple University, Philadelphia, where she received an MFA. Her artworks are in collections such as the Museo de Arte de Puerto Rico, Museo de Arte Contemporáneo de Puerto Rico, and the Library of Congress, Washington, DC, among others. After moving to Washington, DC, in 2008, Peréz García has been a yearly recipient of artist fellowships from the DC Commission on the Arts and Humanities since 2010. She was awarded Public Art Building Communities Grants in 2018 for I’m Gonna Get You, a large mixed-media installation on gender violence exhibited at the Reeves Center, and again in 2020 for an upcoming mural. Recently, Peréz García started to experiment with structural papermaking and was awarded the 2021 Vita Paper Arts Residency at Pyramid Atlantic Art Center in Hyattsville, Maryland.
Peréz García’s artwork Your Hand (2020), which was featured in the Phillips’s juried invitational Inside Outside, Upside Down in 2021, has recently been acquired by the museum.

His work will be on view through August 28. For more information: https://www.phillipscollection.org/