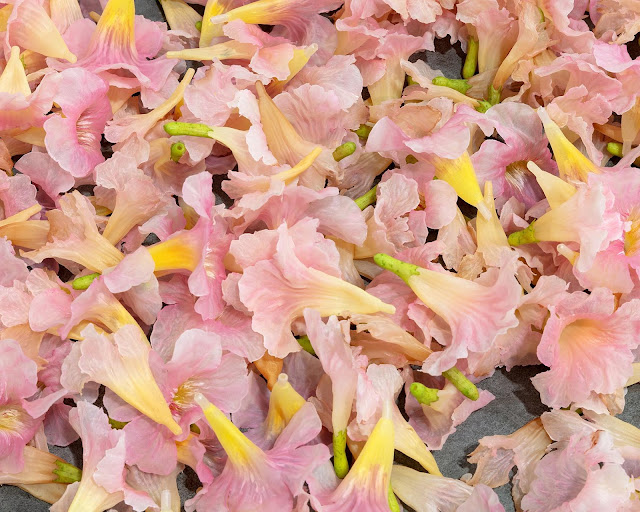 Allora & Calzadilla, "Graft", 2021 (detail). Courtesy of the artists and Galerie Chantal Crousel, Paris. Photo: Sebastiano Pellion di Persano.
Galerie Chantal Crousel is pleased to present Antille by Allora & Calzadilla. The exhibition brings together three major works that center on the Caribbean where the artists live and work. Grounded in the concrete realities of this complex archipelago, the works in Antille consider how colonialism and ecology intersect with Empire building.

Throughout the gallery the artists have installed Penumbra (2020) a virtual landscape that takes the shape shifting qualities of light and shadow as its substance. The projected digital animation recreates the effect of light passing through foliage in the Absalon Valley of Martinique. This tropical forest was the site of a series of now-mythic hikes that took place in 1941 with Suzanne and Aimé Césaire (the Martinican anticolonial poets, theoreticians, and founders of the literary journal Tropiques) and a group of artists and intellectuals fleeing Nazi-occupied France, whose boat had temporarily docked at the West Indian port of Fort-de-France. The refugees included Helena Benitez, André Breton, Wifredo Lam, Jacqueline Lamba, Claude Lévi-Strauss, André Masson, and Victor Serge**, among others. Penumbra is projected in the gallery at an angle based on a real-time simulation of the sun’s location overhead. The artificial light flickers across the space and intermingles with dancing patterns of the sun passing through clouds moving over Paris. Through this interaction, two disparate places converge and create a paradox of light. Penumbra is complemented by a musical composition by the Grammy-award-winning and Oscar-nominated composer David Lang and inspired by “shadow tones,” a psycho-acoustic phenomenon perceived when two real tones create the semblance of a third. 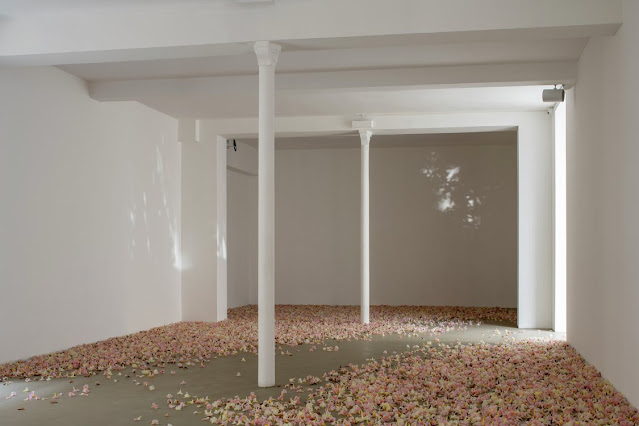 Allora & Calzadilla, "Graft", 2021 Courtesy of the artists and Galerie Chantal Crousel, Paris.
Also installed throughout the space is Graft (2021). Thousands of pink blossoms, cast from the flowers of roble trees (Tabebuia heterophylla), an oak species native to the Caribbean, appear as though a wind has swept them across the floor. The hand-painted petals are reproduced in seven variations or degrees of decomposition, from the freshly fallen to the wilted and brown. Graft alludes to environmental changes that have been set in motion through the interlocking effects of colonial exploitation and climate change. Systemic depletion of Caribbean flora and fauna is one of the primary legacies of colonial rule. Nonetheless, the region remains one of thirty-six biodiversity hotspots, areas that support nearly 60% of the world’s plant, bird, mammal, reptile, and amphibian species but that amount to just 2.4% of the earth’s land surface. In their plastic and unnatural stillness, the flowers in Graft reflect this fragile ecological predicament.

Finally on view are three recent works from the artists Electromagnetic Field series, initiated in 2018, which takes electromagnetism, one of the four fundamental forces of nature, as its subject and medium. The artists experiment with electromagnetism to create forms that are at once abstract and referential. They drop iron filings on top of a canvas and place it above an array of copper cables connected to an electrical breaker in their studio in San Juan. When the breaker is turned on, the electrical current forces the particles into an arrangement of shapes and patterns governed by the electromagnetic field. To set them in motion, the taut canvas is continuously tapped which sends the heavy bits airborne and towards the positive and negative poles. 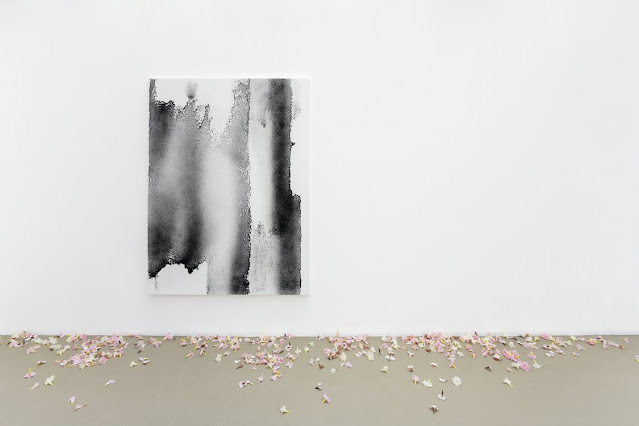 Allora & Calzadilla, "Electromagnetic Field: January 5, 2022 […]", 2022.
Courtesy of the artists and Galerie Chantal Crousel, Paris.
Attraction and repulsion, strength and weakness, accumulation and dispersal are some of the tools the artists employ to find formal resolution in the electromagnetic works. However, the rhythmic balance achieved does not mute the pulsing forces that condition the very appearance of the artwork - from stock market cycles to fossil fuel combustions. The parenthetical component of the work’s title, a lengthy sequence of numbers and letters that they took from their studio electric bill refers to the politics related to the generation, ownership, and distribution of electricity. It is part of the artists’ ongoing interest in using electricity in their art to probe the many facets and figures involved in energy consumption in Puerto Rico and beyond, from the oil futures market and transnational holders of the Puerto Rico Electric Power Authority’s bond debt to the local consumers who suffer the consequences of the bankrupt power authority’s fiscal mismanagement. Allora & Calzadilla’s artistic experiments with electromagnetism are in equal part an exploration of formal principals and a way of confronting the complex nexus that is the energy grid.

Michelle White, head curator of the Menil Collection in Houston, where the artists presented their critically acclaimed solo exhibition Specters of Noon in 2020 / 21 remarked in the accompanying publication, about Allora & Calzadilla’s particular artistic approach: “From the beginning of their partnership in 1995, the artistic duo have explored how socioeconomic inequalities in our contemporary moment collide with the natural world, with all of its marvels and increasingly frightening and overwhelming phenomena. They delight in this discordant and illuminating interaction, which delves into unlikely connections and ignites revealing conversations. Pulling substances, materials, and sounds out of particular contexts, histories, or sites, these works move the viewer through wildly divergent temporal, material, political, and theoretical terrains.
[On view — Allora & Calzadilla] Until May 28, 2022 https://www.crousel.com/
Noticias