Reflexiones sobre el yo, la virgen maría y el colonialismo,(Reflections of self, the Virgin Mary and colonialism), 2020, mixed media collage on canvas, 18 x 24 in.
Derek Eller Gallery is pleased to present a solo exhibition of mixed media works on canvas by Amber Robles-Gordon. With an array of materials including acrylic paint, fabric, beads, magazine images, photographs, and ink drawings, Robles-Gordon assembles patchwork compositions which interweave her personal narrative within the fraught political, socioeconomic, and environmental threads that define the colonialist relationship between the United States and Puerto Rico.
Born in San Juan, with familial roots throughout the Caribbean including the U.S. Virgin Islands, the British Virgin Islands, and Antigua, Robles-Gordon was raised in Arlington, VA, a Washington, DC suburb. Fueled by her need to forge a relationship with her birth place and concerns about the mistreatment of Puerto Ricans in general and Afro-Puerto Ricans in particular both subjectively and on a governmental level (i.e.,the patronizing distribution of paper towels to victims of Hurricane Maria in 2017), Robles Gordon returned to Puerto Rico for the first time as an adult in 2019. Shortly thereafter, she began making a body of artworks which would become the Place of Breath and Birth series. 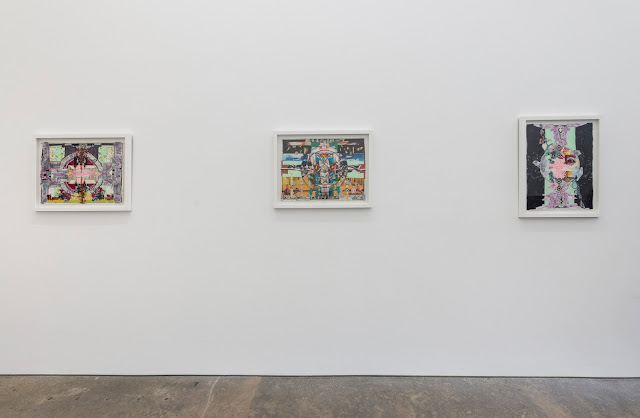 Installation view of Place of Breath and Birth
A recurrent symbology within this series is the Fiscus Elastica commonly known as the Rubber Tree, an indigenous plant of Puerto Rico; abstracted representations of the rubber tree function as central compositional anchors of the works. Robles-Gordon expands on the totemic tree form, surrounding it with circular “ecospheres”, densely packed with information and artifacts related to her spiritual and ethereal connection to her surroundings. She explains, “throughout some of the artworks I am a figure, a witness to the beauty and complexity of the Puerto Rican landscape – tropical jungle, 1,000 of miles of carreteras, the co-mingling and isolation of three major ethnic/racial groups – Taino, the Spanish and Africans, the stranglehold of the United States and the impact of the Caribbean Sea, with its threat of hurricanes, scorching summer heat and lush landscape.” 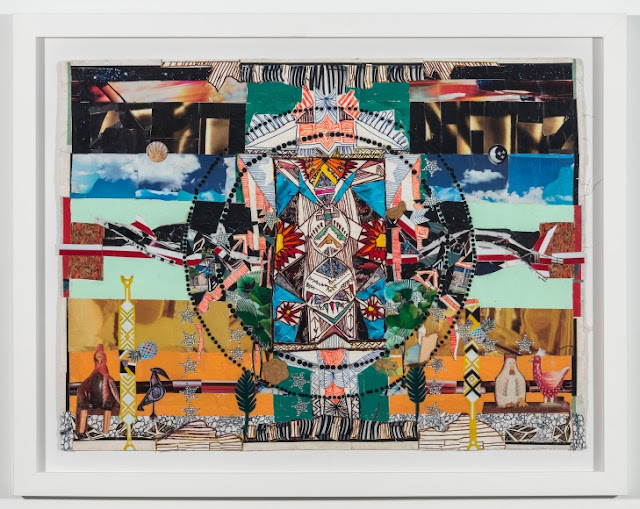 Observación de Influentes cultura y herencia Taino, el clima y el machismo (Observation of Influencers: Taino culture and heritage, the climate and machismo), 2020, mixed media collage on canvas, 18 x 24 in.
Formally and conceptually, these horizontal mixed media works read as flags which denote personhood. Layered with cultural signifiers and framed within abstract gestures, they are emblematic of the artist’s identity as a woman, an Afro-Puerto Rican, and an American. Amber Robles-Gordon (b. 1977 San Juan, PR) lives and works in Washington, DC, and has an MFA from Howard University. She has exhibited nationally and in Germany, Italy, Malaysia, London, and Spain, She had recent solo exhibitions at the Katzen Art Center, American University, Washington, DC and at Galleria de Arte, Universidad del Sagrado Corazón, San Juan, PR. She has completed numerous public art commissions and residencies, including one at The American Academy in Rome in 2019. This will be her first exhibition with the gallery.
Location: Derek Eller Gallery on Broome Street, New York, Tuesday through Saturday from 11 a.m. to 6 p.m., and by appointment. The exhibition will be on view through February 5, 2022.
Noticias