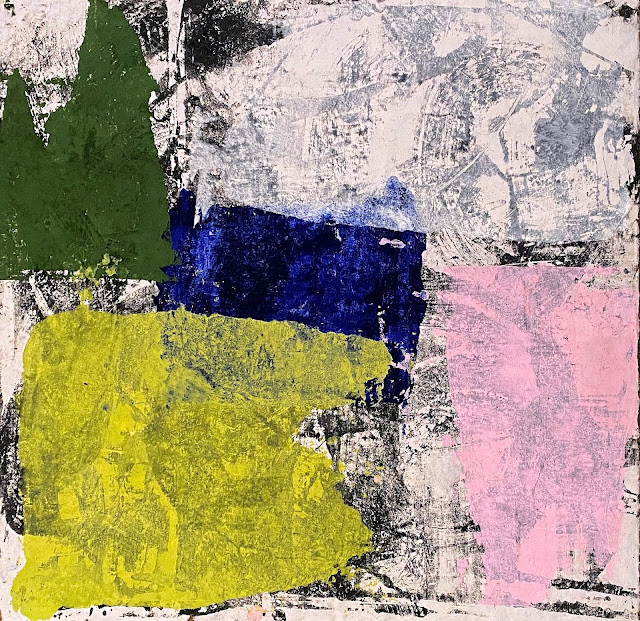 Nublica, 2021, mixed media and carborundum on Japanese rice paper, 39 x 35.50 in
Foltz Fine Art presents Ibsen Espada: Abrasive Silence, featuring over 50 recent paintings by the Houston artist. Espada has established himself as one of the most important contemporary Texas painters, working in a personal mode of gestural abstraction. Known for his unique use of materials, Espada utilizes carborundum as a new element in his latest body of work which enhances and activates the surface with its distinct texture and coarseness. Throughout his career, Espada’s style has continually evolved, yet his mark making is very much his own and subject to continual change of mood. While his previous signature use of bold, gestural black strokes/lines has diminished in this work, the viewer finds the artist employing different techniques in its place to create the same vibrance and colorful, energetic movement found in earlier works; both styles distinctly Espada.
Ibsen Espada (b. 1952) Ibsen Espada was born in New York and raised in Puerto Rico. His identity as a painter has been well established in Houston since he moved here in the mid-1970s after spending time in Puerto Rico with his mentor Cuban artist Rolando Lopez Dirube. Today Espada is considered a leading contemporary artist in Houston, and one of the few Hispanic artists to have participated in the seminal 1985-86 exhibition Fresh Paint: The Houston School, hosted by the Museum of Fine Arts, Houston. 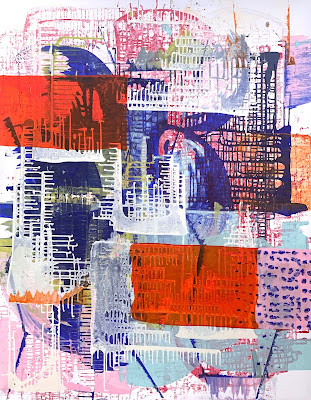 His work was also recognized and included in the highly-publicized 1987 exhibition Hispanic Art in the United States: 30 Contemporary Painters and Sculptors which debuted at the Museum of Fine Arts, Houston before embarking on a 4-city tour to the Lowe Museum in Miami, the Museum of Fine Arts in Santa Fe, the Los Angeles County Museum of Art, and the Brooklyn Museum of Art. From his auspicious inclusion in important exhibitions in the 1980s until now, Espada has remained true to his cultural and artistic roots. For a number of years, he worked as Dorothy Hood’s studio assistant once she returned to Houston after years spent in Mexico. He has been influenced by and has absorbed the work of other modernist masters, including the work of the Cuban artist Wilfredo Lam and the Belgian painter Pierre Alechinsky. However, to his credit, Espada has not been content to remain in a particular style, nor merely to reflect the examples of other artists. His mark making is very much his own and subject to continual change of mood. 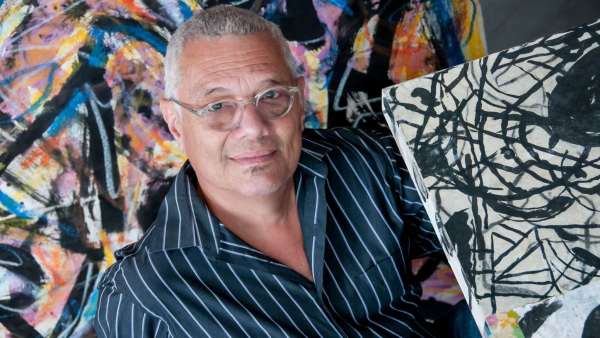 Espada has established himself as one of the most important contemporary Texas painters working in a personal mode of gestural abstraction. He has developed a bold approach that includes calligraphic marks that energize a painting’s pictorial space. He is unafraid of mixing materials in order to activate the surface of his canvas. He employs collage techniques such as the attachment of various papers to his canvases, and he also applies paint with unusual tools. Often, the thin, straight lines in his paintings are applied with automobile wiper blades. Recently, he has begun a series of paintings using large billboard materials, painting directly on top of the printed colors and signage. 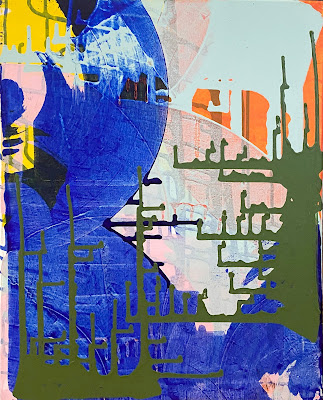 mixed media and carborundum on canvas

While growing up in Puerto Rico, Espada was a drummer in a band that played in bars and restaurants. He has carried his drummer’s sense of rhythm into his gestural approach to painting. The densely layered calligraphic marks in his works simulate a visually pulsating cadence that moves across the entire surface of the painting. It is this intense rhythmic and dance-like movement of Espada’s mark-making that gives credence to the poet and art critic Harold Rosenberg’s famous axiom, “At a certain moment the canvas began to appear to one American painter after another as an arena in which to act…what was to go on the canvas was not a picture, but an event.” Ibsen Espada has indeed captured the pulse of a painting’s ability to be an event. Espada has been recognized as one of the most prolific Hispanic artists working in Texas today and his work can be seen in museum collections, such as the Museum of Fine Arts, Houston; The Modern Art Museum of Fort Worth; The Art Museum of Southeast Texas in Beaumont; and the Art Museum of South Texas in Corpus Christi. Ibsen Espada (b. 1952)

Ibsen Espada: Abrasive Silence will be on view at Foltz Fine Art through November 27, 2021, with opportunities to view the works in person and meet the artist by appointment. For more information, please visit FoltzGallery.com.
Noticias