Frances Gallardo and Nathan Budoff at the Rollins Museum of Art

Nathan Budoff , The Ghost and the Pain, 2017, Charcoal, acrylic, oil, and shellac-based ink , 76 x 92 inches , Courtesy of the artist
Frances Gallardo’s Murmuration (mosquito cloud), 2017. Set up of laser lower paper pinned on wall. Courtesy of artist.
This exhibition features the work of artists Frances Gallardo and Nathan Budoff, both connected to Puerto Rico by lived experience, and in Gallardo’s case, by birth. The exhibition contains work by the individual artists – which examines both the natural phenomena on the island, as well as its current social, economic and political status – and one collaborative piece made by both artists, mailed back and forth to each other through 2020. 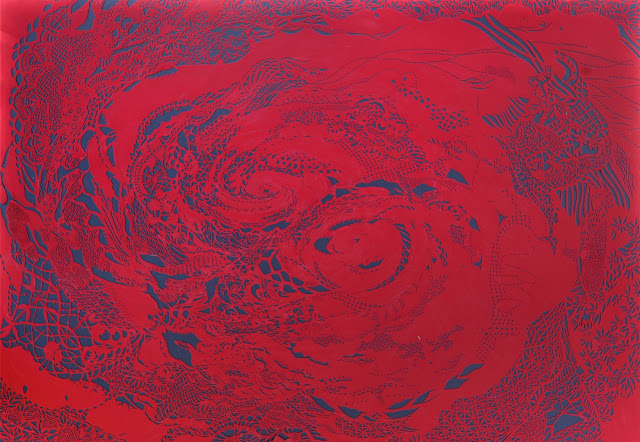 Frances Gallardo. Carmen, 2011. Cut paper, collage. Private collection, Miami, FL.
Frances Gallardo was born in San Juan in 1984; she received a BFA in Drawing from the University of Puerto Rico and an MFA in Studio Art from Cornell University. She has exhibited in venues in the US and abroad, such as the Perez Art Museum in Miami, the Museum of Latin American Art in Los Angeles, the Instituto de Cultura Puertorriqueña in San Juan, and has participated in numerous residencies including the Latin American Roaming Art in Panama City, Caribbean Linked in Oranjestad, Aruba, the Center for Book Arts in New York and La Práctica, Beta Local in San Juan. She has created site specific work, most recently the piece Line to Line commissioned in 2019 by the MTA Arts & Design for the 14th Avenue bridge in the City of Mount Vernon, New York. Currently, Gallardo lives in upstate New York and spends time in Puerto Rico throughout the year. Her work is solidly grounded in her masterful manipulation of cut paper and her skillful draftsmanship. In 2009, Gallardo began researching meteorological phenomena in the Caribbean, particularly hurricanes, wind patterns, mosquitoes’ flight patterns during and after a hurricane, and the effects of Sahara dust in Puerto Rico. Her pieces, partly inspired by the Puerto Rican tradition of bobbin lace weaving, are poetic and beautiful representations of that which cannot be seen, but whose effects are felt on a social, economic, cultural, and environmental level. Considering the hurricane as a phenomenon that brings together people of diverse backgrounds, Gallardo investigates a variety of aspects associated with these events. She mines satellite imagery, Caribbean folklore, image, and sound to transform and subvert the landscape and our understanding of its component parts. 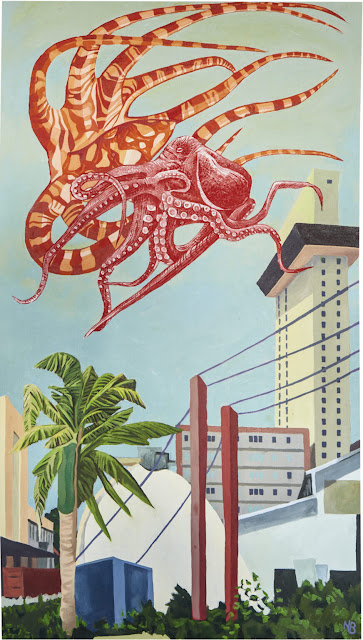 Nathan Budoff. Rising Water, 2017,
oil and shellac-based ink on canvas.
Lent by artist, Nathan Budoff.
Nathan Budoff was born in Brookline, Massachusetts in 1962. He attended the School of the Museum of Fine Arts, Boston and later earned a BFA from the University of Massachusetts, Amherst, an MFA from the School of the Art Institute of Chicago, and a Juris Doctor from the University of Puerto Rico. His work is in the collection of the Museo de Arte de Puerto Rico, the Museo de Arte Contemporáneo de Puerto Rico, the Museo de Arte de Ponce, Museo de Arte de Caguas, Museo de Arte y Diseño de Miramar, the Catherine T. and John D. MacArthur Foundation, the Boston Public Library, and the New York Public Library, and he has received numerous fellowships and awards including a Fulbright Fellowship. Budoff has a long trajectory of artistic creation grounded in the tradition of narrative figuration and detailed draftsmanship. Budoff has lived in Puerto Rico for more than 25 years; the social and political context of the island as well as its environment have informed his work thematically and stylistically. His recent body of work focuses on the Puerto Rican urban landscape and issues of dislocation and environmental deterioration. Budoff combines drawing and painting to create fantastical vistas of San Juan and other areas in Puerto Rico where the manmade and the natural collide. The bright, often intense colors clash with the precision of his drawn images, which often evoke cutouts from book illustrations. Animals are placed out of context, floating above the city, out of place literally and metaphorically. Much of Budoff’s work addresses the ambiguous political status of the island of Puerto Rico and strategically places creatures in contentious juxtaposition to buildings or areas charged with cultural meaning.
Growth, Breadth, and Terrain brings together the work of Gallardo and Budoff and puts it in dialogue in the context of natural phenomena in Puerto Rico. Unintentionally, Gallardo’s lace-like paper cutouts relate to Budoff’s detailed and meticulously rendered animals, trees and foliage, creating a dynamic and colorful symbiotic relationship that, upon closer inspection, reveals a nuanced and critical approach to the current state of things on the island. This selection of work has even deeper relevance after Puerto Rico experienced the devastating effects of Hurricane María in September of 2017, a traumatic event that led those who witnessed it to recalibrate their relationship to the environment and to the political and social structures that are meant to support them.

The exhibition will be on view through December 31, 2021. Find gallery hours, and visiting information here
Noticias