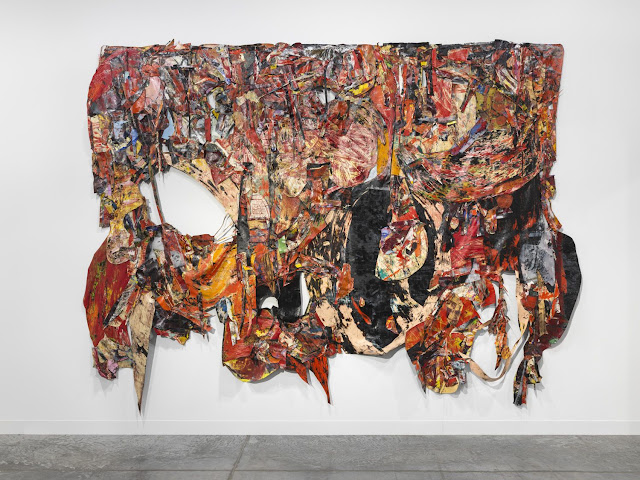 Lehmann Maupin is pleased to announce Angel Otero’s Milagros. The New York-based artist will debut a series of recent, large-scale tapestry-like oil paintings that hang entirely free from a stretcher bar. Over the last decade, Otero has developed physically rigorous and experimental techniques to push the boundaries of painting. Drawing much of his inspiration from the inherent qualities of oil paint, Otero uses collage and materiality as he explores the potential for abstraction to engage issues of identity as well as form, color, and line. The gallery will host a reception for the artist on Thursday, March 7, from 6 to 8 PM at 501 West 24th Street. 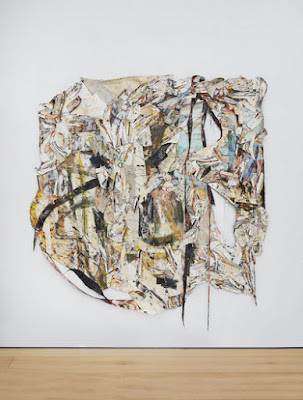 Otero’s practice is rooted in the history of painting and abstraction. Through a methodically innovative process, the artist paints representationally onto large sheets of glass, scrapes the partially dried oil paint from the surface, and then reassembles and often collages the “skins” into multi-layered compositions. For his most recent body of work, Otero builds upon the paintings featured in his 2017 exhibition Angel Otero: Elegies at The Bronx Museum of the Arts, where he premiered a series of large-scale paintings composed of fragments of previous discarded paintings and cut scraps that he had accumulated in his studio over the years. These fragments—smaller, and more varied in size, shape, and palette—introduce new conceptual and aesthetic elements in his work. Whereas previous paintings were collaged from an individual skin that Otero both carved into and painted onto, these new paintings incorporate years of saved and salvaged materials, dexterously arranged together on a scale akin to that of individual brush strokes. Otero’s impulse to reuse materials is linked to his long-held interest in their potential to convey history, memory, and the temporal nature of his practice.

These recent paintings also reference Otero’s personal history more directly. Red Milagro (2018), composed of pieces of past paintings, connects his process with the Milagro objects that fascinated him as a child. The small, metal Catholic charms affixed to sacred objects, which he eventually inherited as precious family heirlooms, are carried for protection or luck. By collecting and then collaging fragments of past work, Otero imbues each painting with a similar reverent display that pays homage to his familial tradition as well as his own history as a painter. 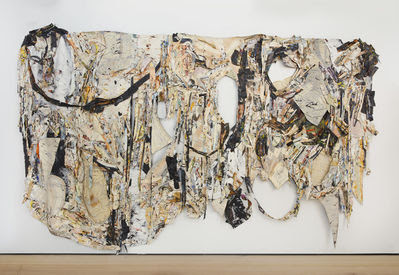 Otero has also begun to incorporate found material such as handmade lace into his paintings, which act as markers of his memories of Puerto Rico. The island’s recent hardship in the aftermath of the 2017 hurricane has brought into poignant focus his regard for and the influence of the people and places that shaped his earliest and most cherished visual memories. These personal references are interwoven amid the art historic layers within his paintings—quoting artists from Nicolas Poussin to Willem de Kooning to Eva Hesse. The inspiration for these ambitious paintings, stitched together to create a perfect rhythm of positive and negative spaces, can be visibly linked to the canonical masterpieces from art history as well as his grandmother’s more humble, yet also masterful, crocheted lace.

Through years of careful observation of the intricacies and structural tendencies of material, Otero has forged an individualistic process and style through the use of his paint “skins” and the endeavor of conflating the genres of both representational and abstract painting. For Otero, a solution to expanding the genre of painting in contemporary art lies in an exploration of this transition between representation and abstraction. In this way, the paint itself emerges as a crucial conceptual component, mobilizing ideas of chance, conveyance, and aesthetic vernacular, while the images and themes it visualizes become fragments or parts of a history energized by the material. 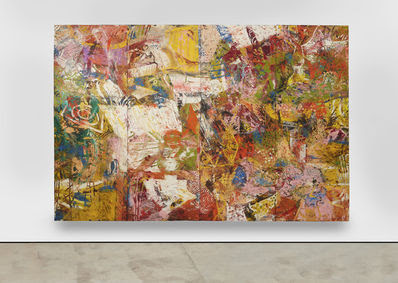