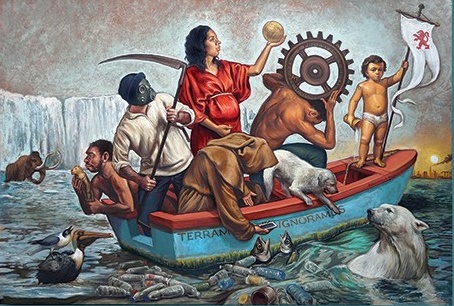 
La Luz de Jesus Gallery is pleased to present “CREDO” by artist Patrick McGrath Muniz. This marks the artist’s second exhibition with the gallery. CREDO explores and questions our myths, assumptions, and beliefs in an age of political uncertainty and misinformation by connecting American Pop consumer culture and religion in paintings inspired by Spanish Colonial Iconography. The work presented responds to our current capitalist consumer driven society with its indifference to the rising threat of climate change by tracing its origins to the time of Columbus and the Spanish colonization of the “New World.” By adopting Renaissance painting techniques on canvas and panel reminiscent of Spanish colonial art, the artist able to emulate earlier indoctrination strategies and devices from the time of the conquest of the Americas. Satirical narratives and anachronisms present in the work enable the viewer to explore and question the ruling Corpocracy with its Colonial roots, Neo-colonial ramifications and its enormous impact on the environment and the poor. Besides asking the modern creed of growth, profit, progress and presumed human dominion over nature, these paintings also question our embedded consumer beliefs and disproportionate attention and faith placed on technology, corporations, and the mass media. 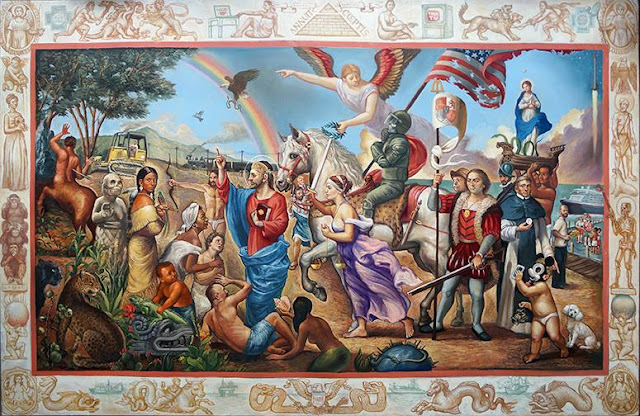 The artist says about his work “After experiencing Harvey in Houston, where I now reside and witnessing Hurricane Maria passing over Puerto Rico where most of my family and friends still live, the issue of Climate Change became even more personal. The recent extreme weather events exposed tremendous social injustice, disaster capitalism, and discrimination against the poor and communities of color by the current U.S. administration. As an artist with a Roman Catholic background and growing up during the 1980’s and 90’s in the island of Puerto Rico, the oldest colony in the Western Hemisphere, I feel a deep interest in reconnecting with history and re-telling the story of climate change the way I know best, in drawings, paintings, and altarpieces. By appropriating figures and icons present in Art History, Pop Culture, Christian Iconography and Mythology, I depict scenes that mirror my own experience living in a world of stronger storms, fires, and floods as well as alternative facts and climate change denial. This re-contextualization of history allows me to start a discussion about what it means to be living under the influence of constant Wall St. propaganda, free market gospels and other consumerist doctrines that perpetually modify our appreciation towards history, nature and ourselves.”

Patrick McGrath Muñiz is a Houston based artist from Puerto Rico, that works primarily with oil paintings on canvas and retablos. His work is inspired after Renaissance, Baroque and Latin American colonial paintings while addressing issues such as colonialism, consumerism and climate change.