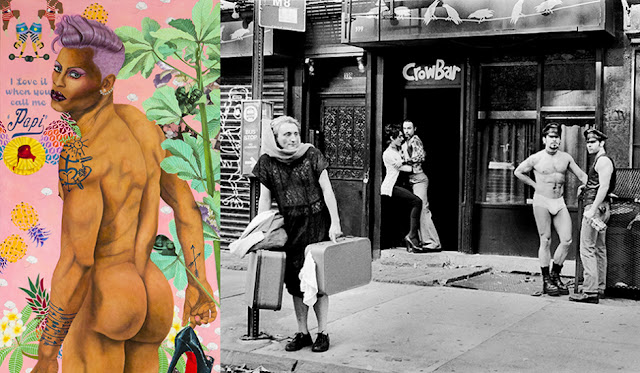 Though in Western tradition, gender is understood as male and female, many world cultures, especially Native American culture, do not have such a precise division. Instead there is provision for, movement back and forth between genders. “Two Spirits” refers not just to the two artists exhibiting, but also evokes a body simultaneously housing both a masculine and a feminine spirit. This exhibit is also inspired by the interplay between spirituality, activism, and queerness, as seen in the longing felt by many people of indigenous descent to connect to this earlier, lost heritage.

Borinquen artists Geraldo Castro and Luis Carle’s works evidence how the radical influences pop culture, including ongoing pushback and questioning of gender roles. Castro painting of visually masculine nude men adorned in feminine trappings juxtaposes roles and notions of traditional beauty. Photographer Luis Carle’s nostalgic imagery recorded gay life and activism in New York City in the early eighties, and revisiting this work now reminds us of the necessity of more activism, as we see what has changed and what has not.

These Two Spirits, and other men like them, take on an important role in the art community; they are healers, visionaries and valued for their balanced perception of existence and a way of being. 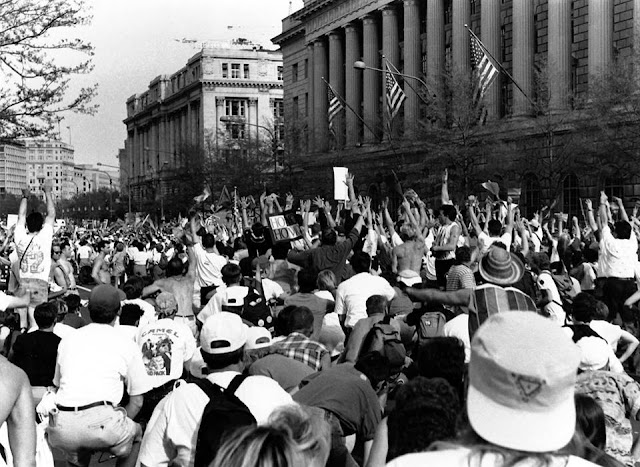 Luis Carle was born in Puerto Rico and moved to New York City in 1984. Carle first studied photography at Parsons School of Design and worked as artist and photographer’s assistant to various well-known photographers including Rebecca Blake, Michel Haddi, Mark Liddell, Arturo Melero and others. In the 1990s, Mr. Carle started working for various magazines and newspapers including: Latina Magazine, CRN Magazine, Footwear News, El Diario La Prensa, San Juan Star and El Nuevo Día. Mr. Carle joined advertising campaigns like Cutty Sark, AT&T, OBRI Cosmetics, and participated in many documentary films. In 1992 he founded and directed O.P. Art, Inc. (The Organization of Puerto Rican Artists, Inc.), a not-for-profit artist’s collective, that has been recognized as an important source of Latin art by the New York Regional Center of the Smithsonian Institute (1999), The Museum of Modern Art (2006), the NYC Library, and accepted by NYFA’s Fiscal Sponsorship program. Luis was the visual arts curator for the NuyoRican Poets Café in the East Village, New York.

Carle’s photographs have captured the essence of a life well lived and have been included in The New York Times, Daily News and other art magazines. His artwork has appeared in galleries and museums in New York, including the Museo del Barrio’s first S-Files Biennial (1999), The African American Museum, Centro Gallery at the Center for Puerto Rican Studies (Hunter College), MOCADA: Museum of Contemporary African Diaspora Arts, and The Museum of Modern Art; and abroad, in The Caribbean Museum (St. Croix, Virgin Islands), Museo of Contemporary Arts (Puerto Rico), Museo de las Americas (Puerto Rico), The Hague Arts Center (The Hague, Netherlands) and the Sarkowsky Gallery (St Petersburg, Russia). He has photographs in the permanent collections of The National Portrait Gallery of the Smithsonian Institution (Washington DC) and the Leslie-Lohman Museum of Gay and Lesbian Art (New York).

He writes: “For decades, the dominant cultural image of masculinity has included heterosexuality, physical strength, financial success, having many children, manly mannerisms and not crying or showing emotion. Society has coded intellect, passivity, softness, emotional intelligence, compassion, care-taking, and sensitivity as feminine, and therefore weak. Being masculine or feminine doesn’t make us less of a man or a woman. Masculinity is not inherently better than femininity; the two are different, and both hold special, powerful aspects. In the Latino culture there’s a belief that men need to be hyper-masculine, domineering, controlling, and without the slightest hint of femininity.”

Gerardo Castro was born in Ponce, Puerto Rico and earned his MFA from Pratt Institute, Brooklyn, NY in 1996. His work has been exhibited locally, nationally and internationally, including Cuba, Puerto Rico, Dominican Republic, Spain, and major US Cities. For close to 20 years Gerardo taught Color Theory, Design and Painting courses at New Jersey City University, Jersey City, and has lectured on the influence of Santeria and other Afro-Cuban religions on contemporary art. In 2008, Gerardo and his partner opened an art supply store, Newburgh Art Supply in Newburgh NY, where he currently resides. Castro organizes the yearly Newburgh Open Studios tour, now in its 8th year and also curates The Lightbulb Project 2012 /2018, a public art project, where 104 artists painted 4-foot wooden light bulbs as a Public Art event in Newburgh, NY.

In Castro’s current series, rather than concealing features that would be deemed unattractive beneath the male gaze, he glorifies them, posing questions around whether masculinity is nature or nurture; passed down through generation to generation, or individually assumed and often hidden behind. Castro has created images rooted in ethnicity and gender as well as culturally dominant fantasies about masculinity and sexuality that have escaped the trappings of popularized constructions of Latino identity; work that enables a connection to history and his roots, a courageous confrontation of meaning and mysticism. Castro seeks to uncover the hidden culture of machismo, a conflict between two identities; gay and Latino: a tension between identity and reality that can be incredibly detrimental to the Latino community; tragedy of machismo is that a man is never quite man enough.