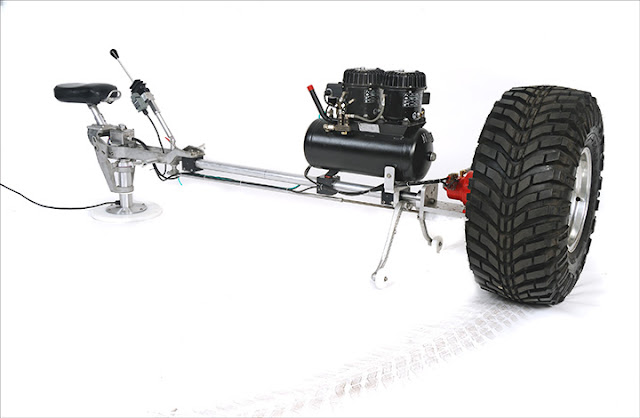 “elmuseo@SVA: May Contain Moving Parts” brings together artists Graciela Cassel, Willie Cole, Franco Frontera, Jon Gomez, Jonas Lara, Arnaldo Morales, Marilyn Narota, Aya Rodríguez-Izumi and Jenny Santos who work in a wide variety of mediums for the first time. Videos by Graciela Cassel render the urban landscape as a series of symmetrical, geometric forms visible through lights that pierce the hazy darkness of the night sky. Willie Cole’s inventive sculptures repurpose colorful women’s shoes in the guise of oversized masks. Franco Frontera’s video pieces play with prerecorded sounds but also involves the artist’s own drumming, engaging with historic instruments and sounds as they are manipulated electronically. Jon Gomez uses three channels to illustrate varied perspectives on the crossing of the U.S.-Mexico border. The haunting sound works of Jonas Lara combine repetitive clips and collages of chanting, heavy bass, guitar, or keyboard. Arnaldo Morales uses found machine parts, discarded tools and hydraulic systems to put his mechanical works into motion. Marilyn Narota’s performance work explores female silence through the presence of the body and visceral references to beauty. Aya Rodríguez-Izumi’s works on paper use familiar words combined with formal and linear patterns. Jennifer Santos creates installations in which viewers are invited to participate, either through moving the assembled objects or by climbing toward a mirror and taking in their own reflection. 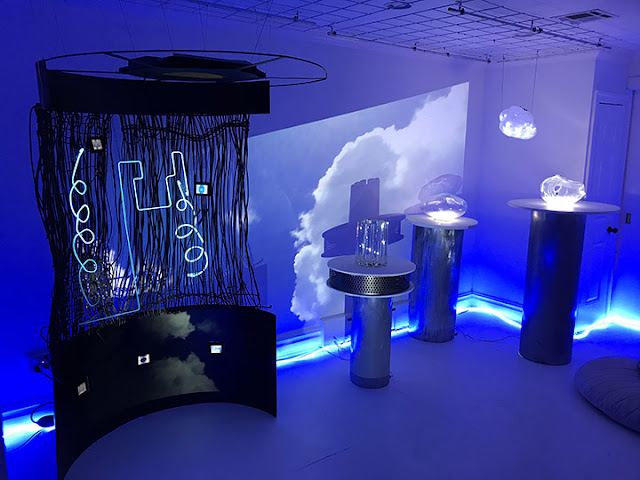 Graciela Cassel is a multimedia artist who works with video installations and sculpture to explore ideas of subjectivity, change and border politics. She was born in Buenos Aires, lives in New York City and has shown her work in solo and group exhibitions in the U.S., Argentina and the Netherlands. She received her MFA from the School of Visual Arts, New York (2014), her MA from New York University (2012), and her BA from the Universidad de Buenos Aires (1980). 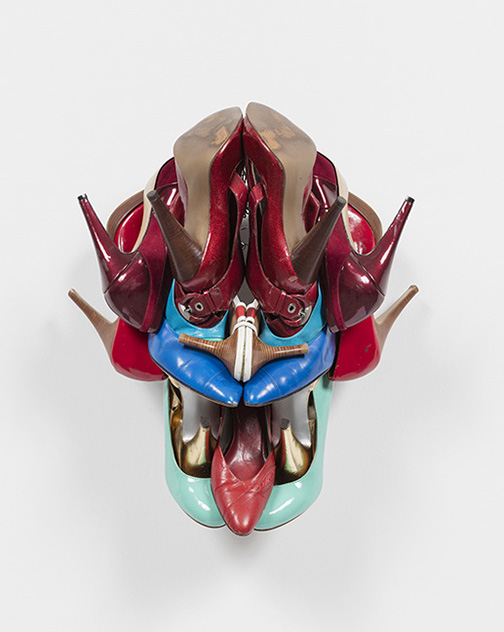 Willie Cole is a sculptor based in New York. His work has shown work at Montclair Art Museum (2006), University of Wyoming Art Museum (2006), the Tampa Museum of Art (2004), Miami Art Museum (2001), Bronx Museum of the Arts (2001) and the Museum of Modern Art, New York (1998). In 2010, a survey exhibition of his work on paper (1975 – 2010) took place at the James Gallery and later traveled to many cities. In January 2013, “Complex Conversations: Willie Cole Sculptures and Wall Works” opened at the Albertine Monroe-Brown Gallery at Western Michigan University in Kalamazoo.

Franco Frontera is a multimedia artist who works with painting and sound. He was born in Aguadilla, Puerto Rico, and lives in New York City. He received his MFA from the School of Visual Arts (2016) and his BFA from the Universidad del Sagrado Corazón, Santurce, Puerto Rico (2013). He has exhibited his works at individual shows at the Flight Cult Gallery and the Calle Cerra, Puerto Rico (2014). He has also participated in group shows at venues such as the Caribbean Social Club (2016), The Lounge (2016), the Galeria Yemayá (2014) and the Flight Cult Gallery (2013), among others. 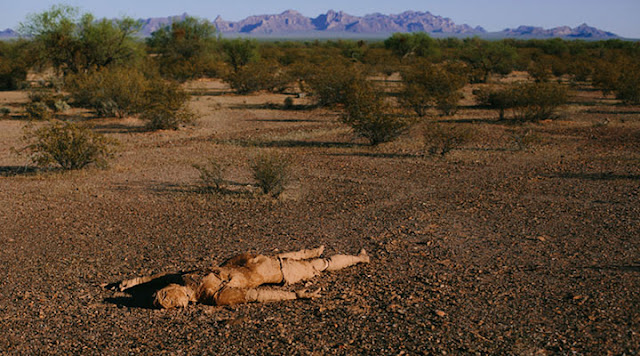 Jon Gomez is a Mexican-American multimedia artist based in Brooklyn, New York. He graduated from the School of Visual Arts with an MFA in 2017. As an artist born in Los Angeles and raised in Mexico, his works travel freely between the universals of Southern California and the lived reality of Latin American communities. Landscapes that predate U.S. expansionism often feature in his recent installations—lands that frame the evolution of immigration, identity, and nationalism in 21st-century America.

Jonas Lara is a photographer, mixed-media artist and musician. Lara joined the U.S. Marines in 2000, started working as an artist in 2003, and has exhibited at several solo and group shows, including an individual exhibition at the Carnegie Art Museum Studio Gallery (2015). He received his MFA from the School of Visual Arts (2012) and his BFA from the Art Center College of Design, Pasadena, California. 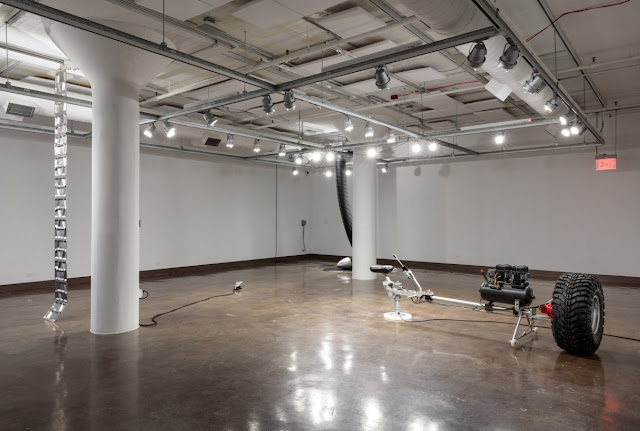 Arnaldo Morales is a multimedia artist who works with industrial materials, low-tech manual devices and mechanical systems. Born in Puerto Rico, he has lived and worked in New York City since 1996. He has shown work at El Museo del Barrio, The Americas Society, and White Box (all in New York), the Galería de la Raza (San Francisco), and The Living Art Museum (Reykjavik, Iceland), among other venues.

Marilyn Narota combines art and psychology to produce socially engaged installations, sculptures and performance-based videos. She was born in Colombia and lives in New York City. She received her MFA from the School of Visual Arts (2016), her post- baccalaureate degree from the Maryland Institute College of Art (2013) and her BA from Williams College (2006). She is the founder of collaborative artist initiatives such as Sly Space, Kaur Studio, FussionArt Magazine and Artilade magazine. Her work has been exhibited at the School of Visual Arts, The Hole, El Museo de Los Sures, and Project for Empty Space. 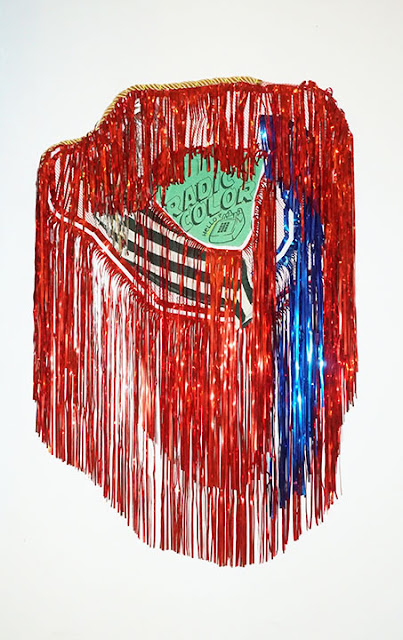 Aya Rodriguez-Izumi is a multimedia artist who works with sculpture, music, installation and performance. She received her MFA from the School of Visual Arts in 2017. She has spent her life moving back and forth between New York City and her birthplace of Okinawa, Japan, and her work often deals with the topics of socio-cultural identity and communication. Since graduating from Parsons, the New School for Design, she has been included in various group shows and has shown at such venues as MoCADA, The Knockdown Center, Free Candy and FLUX Art Fair.

Jenny Santos is a New York City-based multimedia artist who works predominantly in sculpture and installation. Her work often explores the tension between opinions, reality and the unstable, shifting appearances of daily life. Santos exhibited recent works at NURTUREart Gallery, New York (2014), and has participated in group exhibitions at the School of Visual Arts, and Project 165 in Toronto, Canada. She received her MFA from the School of Visual Arts (2012), and her BFA from the Ontario College of Art and Design, Toronto (2007). She has received the Ontario Arts Council Visual Artist Grant (2014), among other awards.