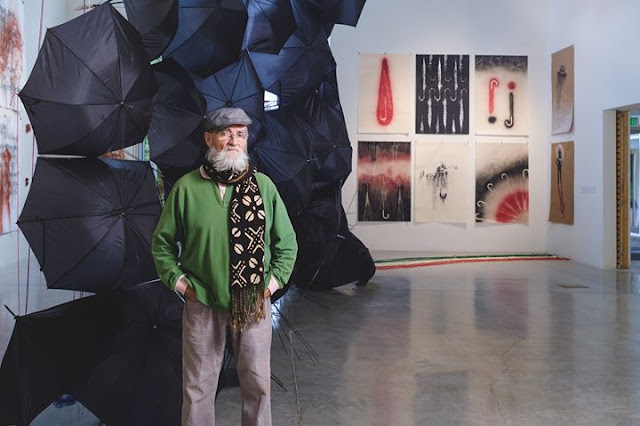 For Linfield Gallery, Antonio Martorell has created a new suite of works that respond to the landscape of Oregon, not as experienced by the artist, but as related to him from people who live here. “When the opportunity came my way to bring an exhibition to Oregon, a place that I had never visited before, I candidly asked: ‘¿Qué pasa en Oregon?’ (What happens in Oregon?) I received an equally candid answer: ‘It rains every day.’”

That short summation of Oregon life sparked an instant image for the artist: the umbrella. Using the image of the umbrella as a jumping off point, Martorell has created a new body of work that includes large-scale works on paper and a site-specific installation. “I never imagined that a singular object could generate so many metaphors, become so meaningful in unsuspected ways.” 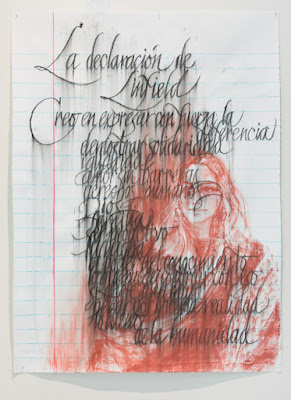 Anchoring the exhibition is the site-specific installation “Umbrella Wall.” Opposite it, foundational texts from Puerto Rico, the United States and the world survive being washed out through the presence of friends and relatives who uphold them. These works invite audiences to reflect on what it means to be a “citizen” in a new digital landscape.

Themes of protection and perseverance are woven throughout the exhibition. As Martorell states: “In these times, one must face the text and survive the test, come rain or come shine. So, let it rain. We make our own umbrellas.”

Antonio Martorell, born in Santurce, Puerto Rico in 1939, lives and works in La Playa de Ponce. He has been artist-in-residence for close to 25 years at the University of Puerto Rico in Cayey. He keeps workshops in Hato Rey and El Barrio in New York.

In 2007, Martorell was selected the Wilbur Marvin Visiting Fellow at the David Rockefeller Center for Latin American Studies at Harvard University for the Winter Semester 2008. While Martorell was in residence at the Fogg Museum at Harvard he created his own interpretations of the masters. He share with students and neighbors the dynamic cycle of creation that passes through destruction teaching ways of re-creating and forging new relationships.

He keeps busy at painting, drawing, installation and performance art, graphics, set and costume design, theatre, films, TV, radio and writing for the press. He has published three books, and exhibited widely in Latin America, the Caribbean, the United States, Canada and Europe, also participating in collective shows in Europe, Africa and Asia, having been awarded prizes in biennials in Italy, Germany, the United States, the Dominican Republic and Puerto Rico. His work was included in the 1997 Whitney Biennial of the Whitney Museum of American Art. 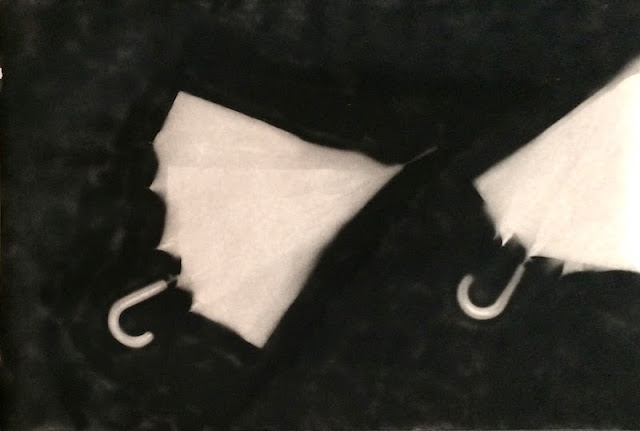 Martorell´s artwork is found in the collections of the Whitney, the Museum of Modern Art in New York, the Museo del Barrio in New York, the Library of Congress, Washington, D.C., the Princeton University Library, the Museum of Modern Art in Mexico City, Casa Las Americas in Cuba, Museo de Arte de Ponce, Instituto de Cultura Puertorriqueña in San Juan and the University of Puerto Rico Museum, among others.

Antonio Martorell’s exhibition, “Rain/Lluvia” is on view at Linfield Gallery, at Linfield College, through Nov. 18. Gallery hours are Monday through Friday from 9 a.m. to 5 p.m., and Saturday from noon to 5 p.m.

The gallery is located in the James F. Miller Fine Arts Center on the Linfield College campus. To reach the gallery from 99W, turn east on Keck Drive at the McMinnville Market Center in south McMinnville. Turn right at the first street onto Library Court. The art gallery is located in the second building on the left, Building B. Parking is available on the street and in the lot west of Nicholson Library.
Antonio Martorell Art News Linfield Gallery Noticias Oregon Puerto Rico