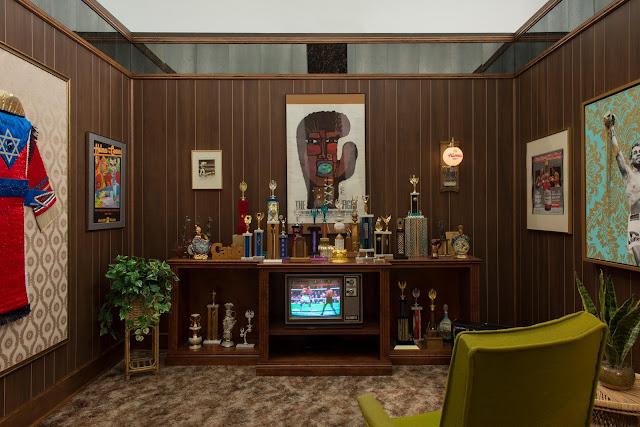 Before language to Hemingway, from the ancient Sumerians to the Greeks to the modern day, there was the sport of boxing. With his exhibit 50 GRAND, Chicago-based artist Carlos Rolón/Dzine will present a dually charged exploration of boxing and domestic culture, inspired by the tactility and performative qualities of boxing, and its relationship to contemporary art at Tube Factory artspace, 1125 Cruft St. It will features a newly commissioned performative installation of live sanctioned Golden Gloves fights, organized by Indy Boxing and Grappling and sponsored by Top Rank Productions. The exhibit is a nod to Ernest Hemmingway’s 50 GRAND and like the story, explores the relationship between courage and professionalism.

With this exhibit, Rolón continues to mine his childhood memories. He invites the viewer to step into intimate scenes such as his family’s wood-paneled basement, decorated with gold garlands and vintage beer placards, where his father would watch prize fights like Roberto Durán V. Sugar Ray Leonard, also known as the No Más Fight. This fight was particularly important for Rolon growing up as it allowed him to sit for short periods of time connecting with his father. 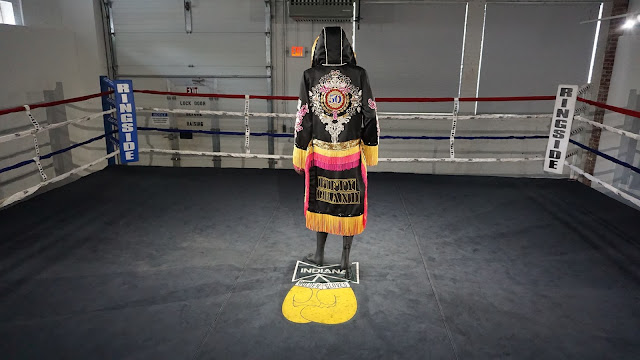 Rolon monumentalizes his blue-collar trophy den as the setting for his exhibition, creating an homage not only to boxing culture, but also to Puerto Rican immigration to America.
Within the exhibition is a newly commissioned performative installation of live Golden Glove fights organized by Indy Boxing and Grappling scheduled May 12, June 2 and July 7, 7-9 p.m.
A robe designed by Rolón will be on display when the ring is inactive.

Within the main gallery is an installation of paintings and sculptural fabric works exuberant with color, texture, patterns, and experiments in surface that create a visual dialogue between the physical charge of boxing, the garments worn by the fighters, and the artist’s own childhood home and upbringing as a first generation immigrant. Occupying the den is a series of custom-made trophies entitled Immigrants/Emigrants (Symbols and Mementos for the Nuyoricans) created, as the artist states “for people like my father and mother who came to the U.S for a better life with dreams and aspirations that never quite materialized, but still achieved success in other aspects of their life.”

Made possible by the Herbert Simon Family Fund, Top Rank Productions, The Andy Warhol Foundation for the Visual Arts and Sun King Brewery 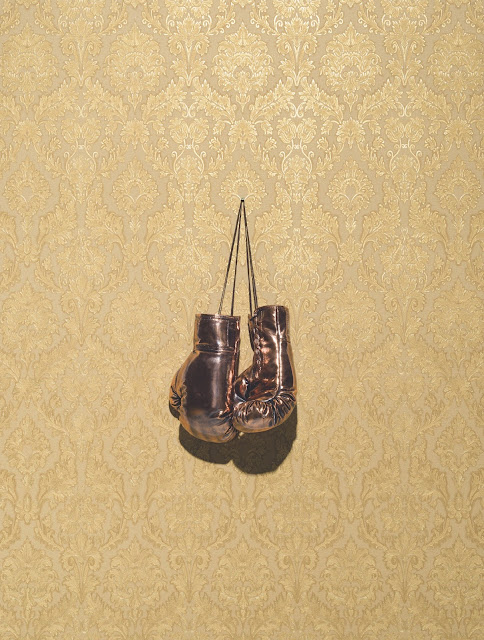 Rolón attended Columbia College Chicago with a concentration in painting and drawing. Rolón has been recognized for his elaborately crafted paintings, ornate sculptures and works that come out of American, Latino and uniquely based subcultures. His studio practice investigates pop culture, craft, ritual, beauty and its relationship to art history, subculture, appropriation and the institution. As a first-generation immigrant of Puerto Rican decent, the artist creates objects questioning the concept of luxury and craft making to explore questions of identity, integration and aspiration. His work also represents a detailed examination of curiosity and the process of art making and the cultures surrounding this. The work often addresses his biography by melding memory and the imaginary with carefully crafted, hybrid works that are playfully situated between the contradictory worlds of conspicuous consumption and urban artifact. The work is at once melancholic, excessive and exuberant, poised somewhere between celebration and regret. Rolón illuminates how the masculine can become delicate and the how the baroque can be minimal. The artist often channels this approach with site-specific installation work, vivid large-scale paintings and ornate sculptures in various materials expanding on ideas of self-reflection and imagined luxury.