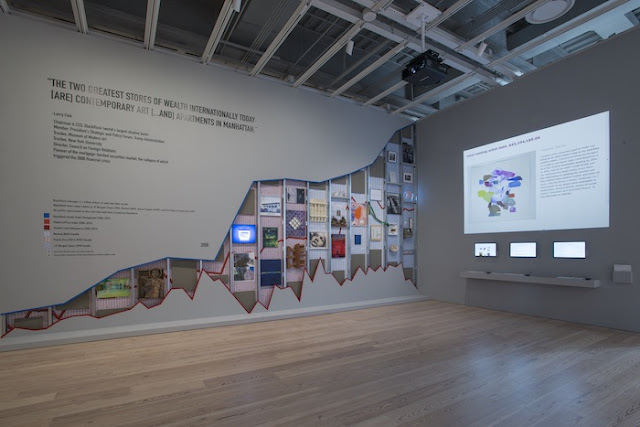 
Formed during the Occupy Wall Street movement in 2011, Occupy Museums connects the struggle for economic and social equity to arts institutions, highlighting instances when the cultural sphere propagates and normalizes unjust or oppressive systems and practices around the world.

In 2012, the collective (Tal Beery, Imani Jacqueline Brown, Noah Fischer, Kenneth Pietrobono and Arthur Polendo) launched Debtfair, an exhibition and organizing platform that groups artists and artworks by their debts and other financial realities. The system reveals the relationships binding individuals to the banks holding their loans as a hidden but highly consequential layer underneath the surface of American art. For the Whitney Biennial iteration of Debtfair, Occupy Museums announced a national call for American artists to answer questions relative to their economic realities for inclusion on debtfair. org. The open call, available in both English and Spanish, received over 500 respondents, providing a detailed glimpse of the reality of the American artist-as-debtor. One artwork from each of thirty indebted artists has been literally embedded into the interior of a wall at the museum and arranged into three “bundles” of ten artists each per bundle. All artists within a given bundle owe money to the same financial institutions. The bundles are: Puerto Rico Bundle (First Bank of Puerto Rico and/or Banco Popular and/or affected by the Puerto Rican debt crisis), Navient Bundle (student loan debt to Navient Corporation) and JPMorgan Chase Bundle (credit card, loan, and mortgage debt to JPMorgan Chase & Co.). Expanded questions relative to each bundle were asked of each artist and have been included here. All 500+ individuals who responded to the Debtfair questionnaire appear in the Whitney Museum via a digital slideshow with a work sample and text response to the question: “How does your economic reality affect your art?” Each bundle is available for sale as a collective unit and priced to provide bundled artists with $2,296.14 each (the per capita share of the $700 trillion 2008 bailout if the people of this country––rather than the banks–– had been considered as “too big to fail”) along with a dollar amount for collective action toward debt justice. 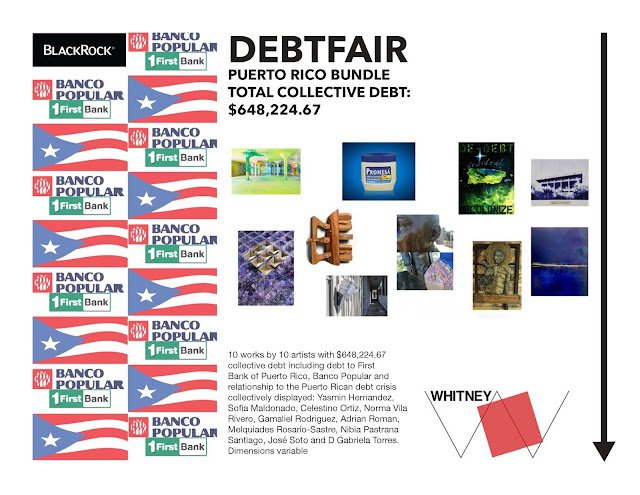 The embedded bundle arrangements also point to the role arts institutions themselves play in this economy: museum board members who straddle the worlds of art and investment finance––the “Collector Class”––profit from artists’ labor, as well as the debt incurred to sustain said production. This relationship is embodied in the figure of Laurence (Larry) Fink. Fink is on the boards of MoMA, NYU, is a member of the Trump Strategic and Policy Forum, and is CEO and founder of BlackRock, Inc., the largest asset manager in the world currently managing $5.1 trillion in assets. According to Fink, “the two greatest stores of wealth internationally today [are] contemporary art [... and] apartments in Manhattan,” thus placing the Collector Class at the center of the speculation, gentrification, extraction, neocolonialism, price gouging, runaway costs of living, profiteering and deregulation that affect the majority of Americans today. Completing the relationship cycle, BlackRock is a majority institutional owner of the financial institutions embedded through Debtfair in the walls of the Whitney Biennial: Banco Popular, First Bank of Puerto Rico, Navient Corporation, and JPMorgan Chase & Co. (also a major sponsor of the Biennial). The thirty Debtfair artworks are plotted between two graphs, situating artists’ precarious conditions between the fault lines of booming debt financialization via BlackRock’s dizzying post-2008 rise on the one hand and the ultra-luxury asset market for contemporary art on the other.

With Debtfair, Occupy Museums calls on artists and the art public to recognize the two booms of the art market: that of the financialized art object and that of artist debt. The American artist is a debtor; with seven out of ten of the most expensive schools in the United States being art schools and the field of “art” being one of the most precarious and unregulated sectors in the US economy, the PUERTO RICO BUNDLE 10 works by 10 artists with $648,224.67 collective debt including debt to First Bank of Puerto Rico, Banco Popular and relationship to the Puerto Rican debt crisis. NAVIENT BUNDLE 10 works by 10 artists with $1,649,938.95 collective debt including debt to Navient Corporation. JPMORGAN CHASE BUNDLE 10 works by 10 artists with $1,403,699.71 collective debt including debt to JPMorgan Chase & Co. LARRY FINK & reality of American art today is inextricable from its economic insolvency. The thirty artists embedded in the Whitney Biennial represent $3,701,863.33 of collective debt that is ultimately managed by BlackRock and traded for reinvestment in art, real estate, armament, oil, austerity loans and more debt with nearly all profits going to the Collector Class. In asking the artistic community, “How does your economic reality affect your art?”, Debtfair highlights that all of our debts are connected and locates art’s proximity to the financial industry as a leveraging point for a collective demand for debt justice.