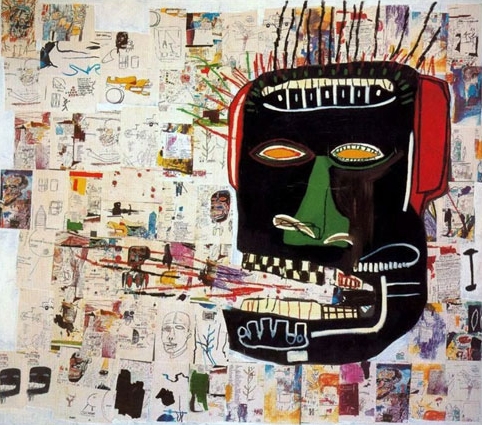 
Basquiat: Boom for Real is the first large-scale exhibition in the UK of the work of Haitian-Puerto Rican - American artist Jean-Michel Basquiat (1960—1988). One of the most significant painters of the 20th century, Basquiat came of age in the post-punk underground art scene in Lower Manhattan in the late 1970s. By 1982, he had gained international recognition and was the youngest ever artist to participate in Documenta in Kassel. Basquiat’s vibrant, raw imagery springs from an impressive erudition, seen in the fragments of bold capitalised text that abound in his works — offering insights into both his encyclopaedic interests and his experience as a young artist with no formal training. Since his tragic death in 1988, Basquiat has had remarkably little exposure in the UK – where there is not a single work in a public collection. Drawing from international museums and private collections, Basquiat: Boom for Real brings together an outstanding selection of more than 100 works, many never before seen in Britain, and opens at Barbican Art Gallery on 21 September 2017. 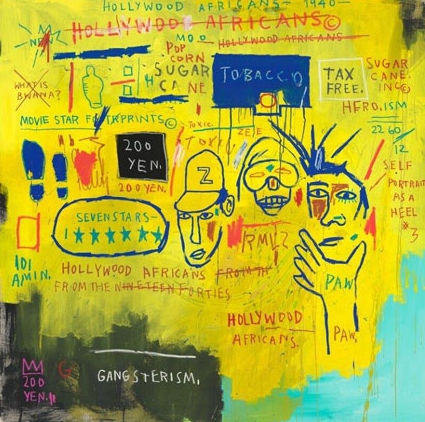 Jane Alison, Head of Visual Arts, said “We are truly thrilled to be staging the first show on Basquiat in the UK in over 20 years. The creative brilliance and emotive power of Basquiat continues to have a huge impact and influence on a wide range of artists, filmmakers and musicians. This will therefore be a rare opportunity for visitors to see a huge body of some of his most famous and also little known works in one place.”

Jean-Michel Basquiat's sisters, Lisane and Jeanine Basquiat said “We are delighted to be working with the Barbican on this important exhibition, which is so long overdue” Basquiat first came to the media’s attention in 1978, when he teamed up with his classmate Al Diaz to graffiti enigmatic statements across the city under the collective pseudonym SAMO© (which stood for ‘same old, same old bullshit’). Soon he was making drawings in his own blood; collaging baseball cards and postcards; and painting on clothing, architectural fragments and increasingly on enormous canvases. He starred in the film New York Beat with Blondie’s Debbie Harry (written and produced by Glenn O’Brien with Maripol); appeared in nine episodes of O’Brien’s cult cable-television show TV Party; and performed in his experimental band Gray. He collaborated with other artists, most famously with Andy Warhol; created murals and installations for notorious New York nightclubs including the Mudd Club and Area; and in 1983 produced ‘Beat Bop’, a classic hip hop record with K-Rob and Rammellzee. 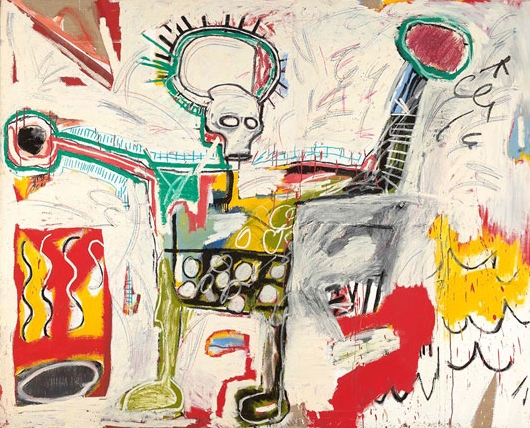 Highlights of the Barbican’s exhibition include a partial reconstruction of the first body of work that Basquiat exhibited, made for Diego Cortez’s watershed group show New York / New Wave at PS1 in February 1981. These exhibits are brought together for the first time in 35 years, allowing visitors to understand how Basquiat so quickly won the admiration of his fellow artists and critics. The Barbican exhibition continues with an exploration of his energetic, often collaborative, work as the prodigy of the downtown scene – from the birth of SAMO© to his relationship with Warhol. In the downstairs spaces, new scholarship sheds light on some of his most acclaimed paintings and drawings. A famously self-taught artist, Basquiat sampled from an extraordinary breadth of source material – from anatomical drawings to bebop jazz to silent film – but many of these reference points have remained relatively opaque until now. With the support of the Basquiat family, the curators have conducted extensive new research, which will allow these important works to be understood as never before.

Basquiat: Boom for Real is curated by Dr Dieter Buchhart and Barbican Art Gallery Curator Eleanor Nairne and organised in collaboration with the Schirn Kunsthalle Frankfurt.