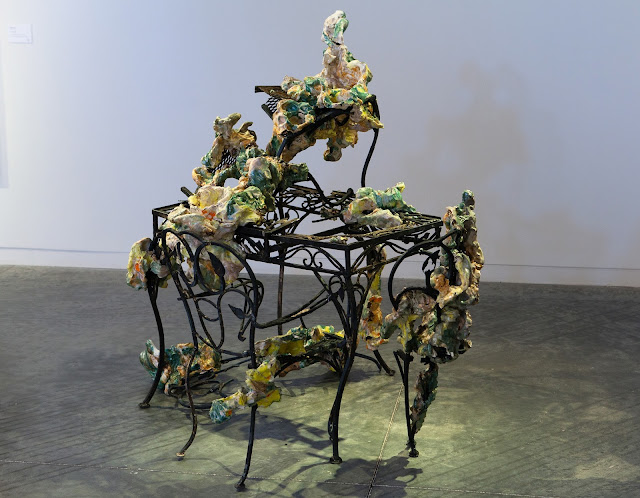 HOUSTON, TX —Angel Otero is a painter and sculptor whose lush, seductive canvases and hybrid works in porcelain and steel test the elasticity of these traditional forms. The Contemporary Arts Museum Houston is pleased to present Angel Otero: Everything and Nothing, which chronicles the evolution of the artist’s practice from 2009 to date. The exhibition features four distinct bodies of work, including his iconic “skin” and “transfer” painting, early paintings which are created using silicon and collage, as well as sculpture. Otero offers thought-provoking new dimensions to the field of abstract painting. Drawing upon the history of painting, the artist presents a proposition of shifting perceptions of the genre–what it is and what it can become. His experimentations in painting push the field into new territory for our time. Moreover, his sculptures invite audiences to suspend expectations surrounding the three-dimensional form; like his paintings, Otero’s sculptural work infuses the genre with narratives that are both personal and universal. This is the artist’s first survey exhibition. 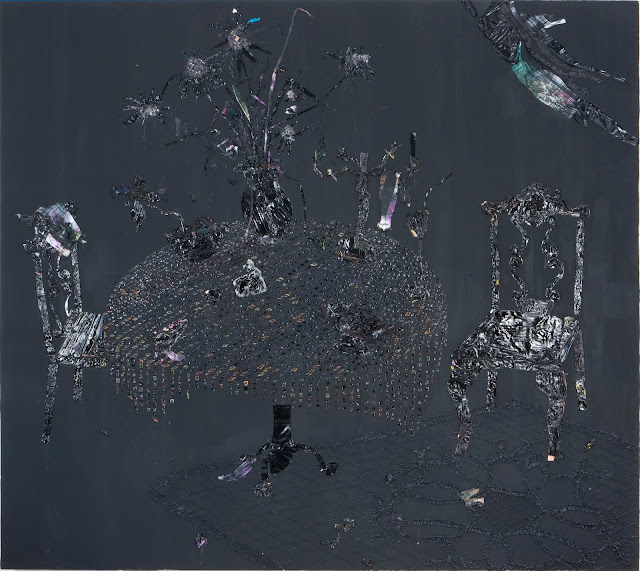 Born in Santurce, Puerto Rico in 1981, Otero draws on geography and familial history as inspiration in his work. Otero did not grow up immersed in the arts. At the age of 12, Otero found an art class through an advertisement that stated, “Do you want to learn how to paint like Bob Ross? We give official classes.” Otero was by far the youngest student; his classmates were all over the age of 60. As a child he practiced drawing by recreating comic figures, never as interested in the content as in the process. The idea of abstraction resonated with Otero when he visited the Museo de Arte de Ponce and saw the paintings of fellow Puerto Rican Arnaldo Roche; the work left an indelible imprint upon him. Despite being discouraged from his pursuit to become an artist and a short foray as an insurance agent, Otero chose to study at the School of the Art Institute of Chicago, with the support of a teacher. Once in Chicago, Otero immersed himself in the history of painting, especially modern and contemporary art. He successfully completed undergraduate and graduate studies at the School of the Art Institute, specializing in painting. Otero is currently based in New York and continues his practice of exploring objects, process, and transformation. For the artist, the question itself has become the subject. 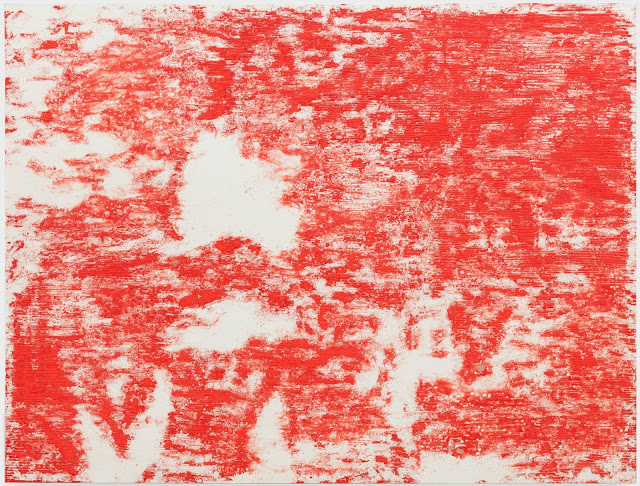 Although Otero’s works are visually abstract, they are embedded with deeply personal narratives. His early still life paintings are inspired by childhood memories of Otero’s grandmother’s home, especially the light and composition of her dining table. The “skin paintings” for which is he is most well-known emerged from an exploratory process—indeed from “failure.” The exhibition’s title is taken from a 2011 work by Otero, which is borrowed, in turn, from a parable by the great Argentinean writer Jorge Luis Borges. Otero’s Everything and Nothing, with its undulating surface of rich hues, primarily red and orange, is an example of his skin paintings. The works are inspired by iconic paintings throughout art history, particularly the Baroque period. In creating the “skin” paintings, Otero begins by painstakingly recreating well-known masterpieces in oil on large sheets of Plexiglas, which he then destroys to make other works by peeling off the oil-paint skin and collaging it on a new canvas, thereby leaving the original image either completely obscured or barely visible. In one case, Otero recreated Titian’s Bacchanal of the Andrians (Museo del Prado, Madrid), dissolving the scene of revelry on the island of Andros into an explosion of color and unstructed composition. The resulting painting, Bacchanale (2012), reveals notions of the studio as a laboratory and of the artist’s hand performing a range of experimental action. This process shows Otero’s artistic impulse to insert himself into the art historical canon even while displaying ambivalent feelings about the hierarchy assigned to its narratives. 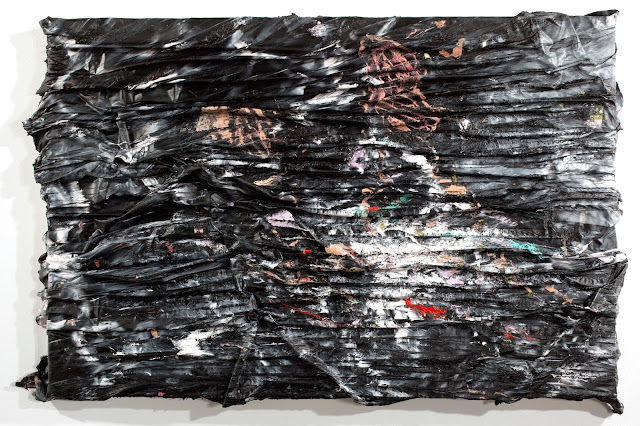 Angel Otero, In the mood for love

Otero began making his “transfer paintings” in 2010 and has consistently used them to counterbalance his signature “skin” paintings. While the latter channel the artist’s struggles with the weight of art history, the former function more as a personal journey into his intimate life. The “transfer paintings” are made by projecting a digitized photograph onto canvas to create a template, outlining parts of the image in silicone, applying loose graphite pigment to the silicone, and compressing the surface with Plexiglas. One such work, Portrait of Dad When He Was Young (2010), is of his father as a boy. The portrait and other “transfers,” as he calls them, function more like monotype prints than paintings, but the artist deploys the process to great effect. Generally large in scale, the works are based on old photographs the artist collected while on a visit home to Puerto Rico. Otero digitally recomposes and, in this case, intentionally cropped the image, allowing viewers to focus on the small child in a pressed uniform holding fast to an adult’s hand. The sparse use of graphite powder infuses the figure with an inherent innocence and vulnerability. In addition to the early transfers, the exhibition will feature a series of Otero’s newer transfers created using cadmium (a red pigment) that underscore the artist’s fascination with his broader cultural interests shaped by childhood fascinations of the mainland. The title of his red painting LAGO (2015), for example, is a reference to the fictional red-painted town in Clint Eastwood’s 1973 American Western, High Plains Drifter. 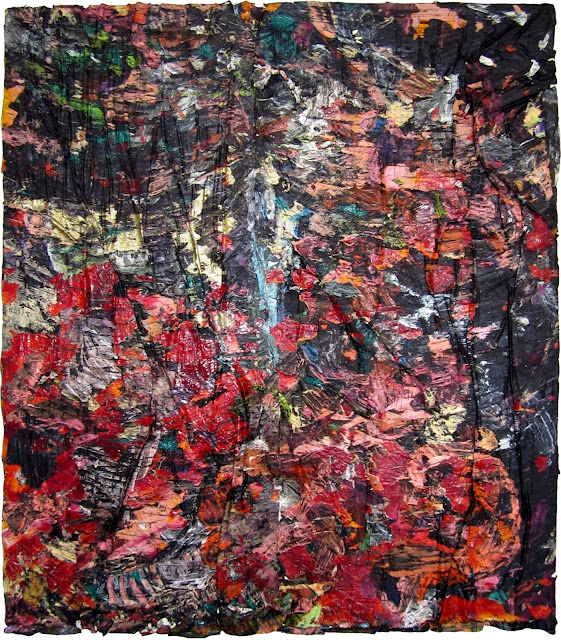 Angel Otero, The dangerous ability to fascinate other people


Always challenging materiality and process in his studio, Otero turned to sculpture in 2012. Otero drew on his memories and, again, on old photographs to produce these works. The wrought-iron fence and balcony structures of his grandmother’s home in San Juan, where he spent much of his childhood while his parents were working, permeated his imagination. The interior of his grandmother’s home was filled with bric-a-brac and curiosities, including ceramics. The objects that were deemed precious were placed out of his reach, which only led him, in retrospect, to imagine their transformation into totemic objects. The sculptures started as broken pieces of porcelain and masses of unfired clay that Otero then placed in large fragments of wrought-iron gates he found in antique stores or on the streets. This process was so new and experimental that studios would not allow Otero to use their kilns, so he purchased his own and placed it in his studio. Through trial and error, he once again stumbled onto a new method and a signature aesthetic.

The Contemporary Arts Museum Houston is located at 5216 Montrose Boulevard, at the corner of Montrose and Bissonnet, in the heart of Houston’s Museum District. Hours are Tuesday, Wednesday, and Friday 10AM–7PM, Thursday 10AM–9PM, Saturday 10AM–6PM, and Sunday 12PM–6PM. Admission is always free. For more information, visit CAMH.ORG or call 713 284 8250.