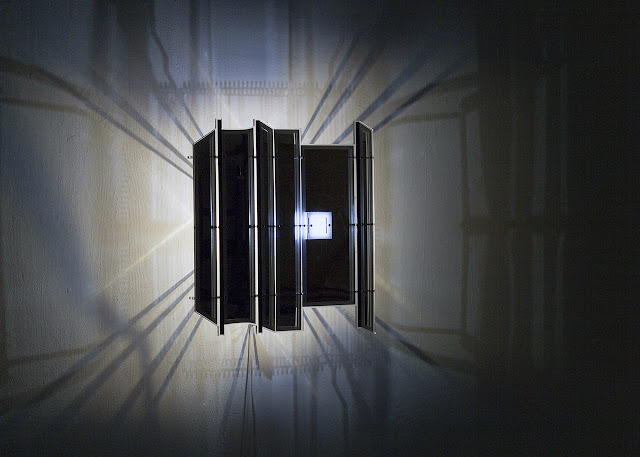 The show at Peligro Amarillo features Myoda’s historic representations of nimbuses in religious art — Greek, Buddhist, Hindu, Islamic, Christian, and others — which he uses as a springboard for dynamic wall compositions that investigate the transformative quality of light. Geometric nimbuses occur throughout these histories, but vary significantly due to their perspectival representations. As Myoda states, “Each perspectival system places subjects and their nimbuses in different spatial relationships, and therefore provides a different attitude of spectatorship, from the immersive and corporeal to the detached and otherworldly.”
Myoda’s sculptures are developed in various two and three-dimensional design applications and then fabricated using computer-based technologies such as laser and water jet cutters, 3D printers and traditional hand tools. Myoda combines materials such as reflective acrylic, aluminum, LEDs, microprocessors and infrared sensors to create these constructions. In direct response to the viewer’s movements, the sculptures exhibit an array of behaviors in varying intensities, rhythms and light effects. 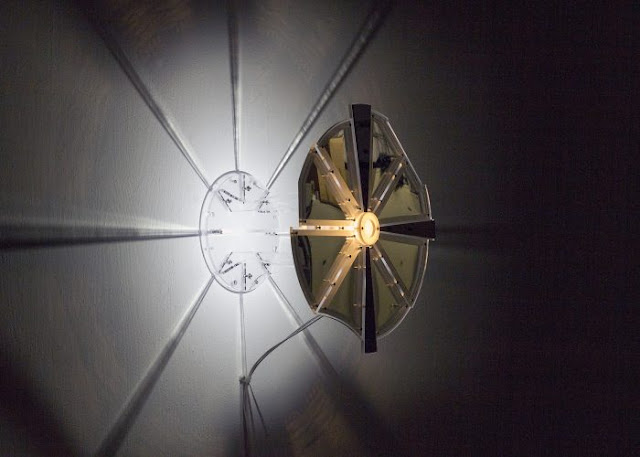 About Peligro Amarillo / Santurce Founded in 2016, PELIGRO AMARILLO / SANTURCE is a contemporary art outpost located in the arts district of San Juan, Puerto Rico. Like the flagship Yellow Peril in Providence, RI, the outpost fosters art critiques from emerging, mid-career and established artists who have been featured in biennials and museum exhibitions, participated in top tier art fairs and acquired by private collectors worldwide. Its presence in the Caribbean will connect audiences with the gallery’s roster of artists and introduce Puerto Rican artists to audiences outside the region. For more info about future exhibitions at both Peligro Amarillo and Yellow Peril, visit www.peligroamarillo.com.