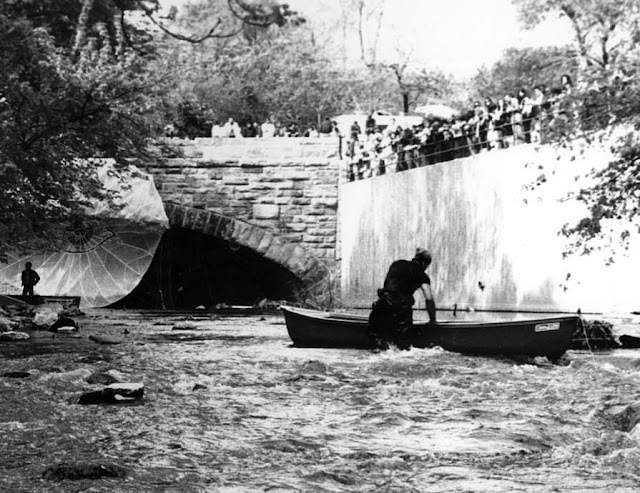 Papo Colo performed "Against the Current,"1983

MoMA PS1 revisits the seminal performance work of Puerto Rican artist Papo Colo, a pioneering figure in New York’s art scene since the 1970s. From May 22 through August 29, 2016, documentation from Colo’s early works will be on view in the museum’s lobby. The presentation at MoMA PS1 will coincide with The Cleaner, a new work the artist is performing in New York’s Chelsea neighborhood, and will culminate in a festival in Puerto Rico in January, 2017, with the aim of drawing attention to the island’s present economic crisis.

The MoMA PS1 presentation centers around Colo’s Superman 51 (1977), in which he drags a collection of fifty-one white pieces of wood behind him, tethered to his body with ropes, as he runs shirtless down an empty stretch of Manhattan’s West Side Highway until collapsing from exhaustion. Completed the year after the United States bi-centennial in 1976—also the year of MoMA PS1’s founding—it marks a historical juncture which saw the failure of Puerto Rico’s bid for statehood in the United States congress. Evoking the Greek myth of Sisyphus, the work conveys an explicitly political content: the fifty-one pieces of wood refer to the number of states in the existing American union plus Puerto Rico, which would have become the fifty-first. For Colo, the number fifty one also represents the decision-making power of a simple majority under democratic political systems. 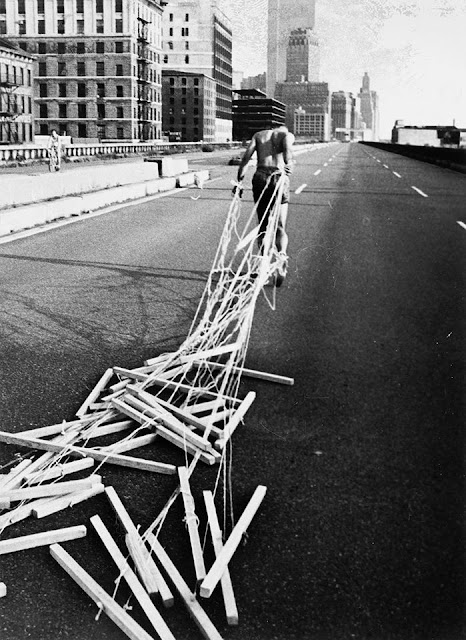 Seven years later, Papo Colo performed Against the Current (1983) as part of the exhibition Inside Out, which saw the artist paddle a canoe upstream amidst the trash and debris of New York’s Bronx River, a small body of water that bisects the borough. An endurance-based performance, the work sought to highlight the river’s contamination by industrial pollutants. For Colo, the effort to fight against the natural movement of the water also functioned as a metaphor for the struggle of Puerto Ricans attempting to assert an economic and social identity in the context of Reagan-era politics. Documentary footage of this work and Superman 51 are included in Colo’s autobiographical film retrospective La Diferencia (1986), which will be included in the show.

The Cleaner (2016), an independent performance by the artist consists of a new street performance in New York’s Chelsea neighborhood, which will take place on the corner of 23rd Street and 10th Avenue each Saturday from May 21 to July 4, 2016, between 4pm and 6pm. Wearing a white suit and Panama hat, Colo will mop and scrub the sidewalk before placing fifty dollar coins on the ground, which he will then proceed to clean one by one. Referring to topical issues surrounding money laundering in Latin American tax havens, as well as to the stereotype of Latinos working as “cleaners” in the American economy, The Cleaner connects questions of domestic and individual labor to broader political and economic structures that reify and make possible imbalanced systems of power.

Papo Colo’s presentation at MoMA PS1 and his Chelsea performance mark the beginning of a celebration of his work that will culminate in a festival in Puerto Rico the following January. Forty years after both his initial performance in New York City and the rejection of Puerto Rico’s statehood, the island of Puerto Rico, which remains a United States territory, is faced with an unprecedented economic crisis. Saddled with overwhelming sovereign debt, Puerto Rico’s status as a territory forecloses the possibility of declaring bankruptcy, a right which is only available to states. Organized in collaboration with the Museo de Arte de Ponce, the festival will draw attention to an island in crisis through a series of interrelated events that take place over the weekend of January 6 – 8, 2017, culminating in THE ANCHO-RITE (Mystifarian art making in the rainforest for 13 months - 400 days), a new performance work by Colo that will take place in the tropical rainforest of El Yunque National Park.