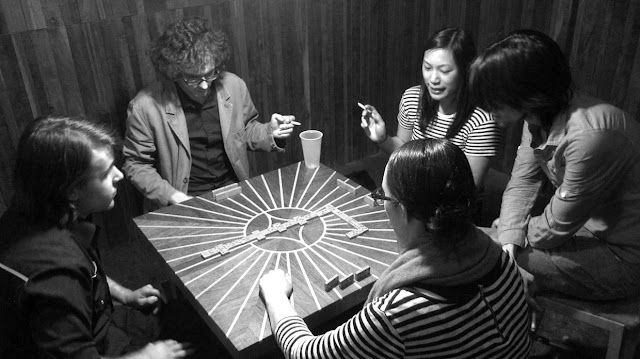 DOMINODOMINO is a meticulously crafted jatoba wood table with corian inlay, inspired by the cement domino table common to Puerto Rico. The immersive installation is evocative of a game room where playing dominoes invites and challenges connections amongst friends and strangers. All are invited to sit at the table and play.

EXPO Projects is presented alongside IN/SITU in and around Navy Pier, featuring a curated selection of projects organized by EXPO CHICAGO. The site-specific installation program highlights large-scale and performative works by emerging and established artists represented by 2015 Exhibitors.

Vernissage (by invitation)
Thursday, September 17 | 6:00pm–9:00pm.
Presented by the Women’s Board benefitting the Museum of Contemporary Art Chicago. 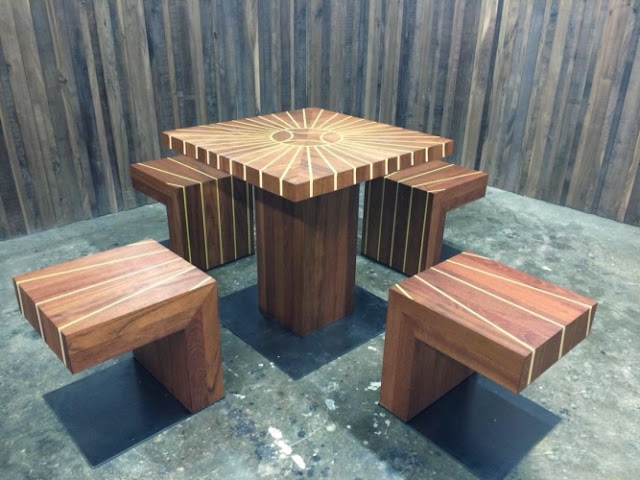 During a visit to Puerto Rico, Soto and Sullivan encountered a traditional domino table made of cement in the county plaza of Ponce. The utter simplicity of its form made this piece of cement food for thought. Soto and Sullivan were further influenced by the popular rumor of the 1920’s that Marcel Duchamp stopped his artistic practice in order to dedicate his life to master the art of playing chess. Immersed in ideas of art and design, Soto and Sullivan decided to create a high-end version of this particular cement model.

Their great affinity for the game of dominoes led them to create an immersive installation evocative of a familiar game room that conveys how playing dominoes invites and challenges connections among friends or strangers. The act of playing a game demands physical or mental focus while relinquishing pleasure. However, it is also an act of leisure that Sullivan and Soto can compromise to, equally excited in seek of a thrill.

Among its various meanings, “domino” is a word rooted in power, originating from the Spanish verb to dominate. DominoDomino intends to portray the various power plays embedded in ideas of collaboration; the figurative and administrative meaning of commonwealth; the inevitable variants that multiracial coupling disperses from a cultural inherence of ideals and traditions; the ambiguous nature of work versus leisure time.

The domino table, meticulously crafted by Sullivan and the centerpiece of this installation, was made with jatoba wood and tinted with a dark patina. The graphic detail is made with inlaid corian, inspired by decorative iron screen designs commonly found in Puerto Rico. Decorative iron screens became ubiquitous in the architecture of post-war Puerto Rico due to the security they provided and their ability to allow for cross ventilation. Mid-century Spanish design elements added character. Today, these screens are viewed as much as a protection device as a language that pertains to the island’s visual culture.

One of a limited edition of domino sets, also crafted by Sullivan, is set on top of the domino table for audience members to play. This domino set comes with a set of instructions of Soto and Sullivan’s preferred playing method.
art arte Dan Sullivan Edra Soto Noticias Puerto Rico